My Work at Home Adventure

Since the time I was 16 I had a job. Really, I had jobs before then, but nothing “official” until I was 16. I always planned on being a working mom. I didn’t think there was any way for me to not work! I graduated highschool. I moved up in jobs steadily while earning my bachelors degree [I should be finishing it this spring, fingers crossed] and focusing on a long term career. Then I got injured at work and harassed over it. I quit my job thinking I’d find a new one ASAP. Then I realized how much I loved being home with my kids. So I began researching ways to work at home. 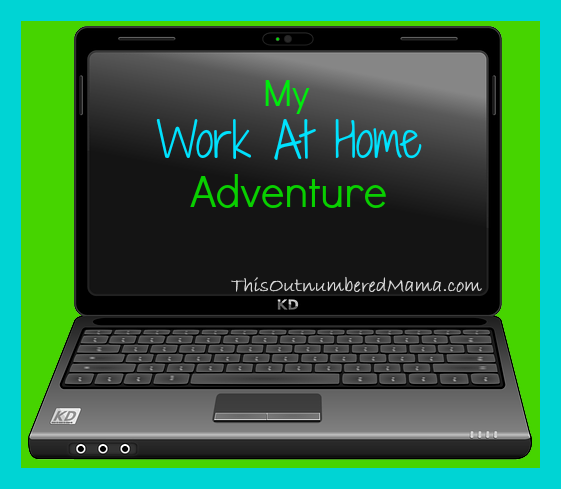 I am adamantly against spending money to make money, unless you are purchasing something real [like a starter pack of makeup for showings]. Then I had to factor in that I couldn’t do a job where I needed a silent office to use the phone. With three boys 4 and under? Silence doesn’t happen in this house. Ever! I’m also not crafty in the slightest, so an etsy shop or craft fairs was out of the question as well.

This left me feeling pretty defeated. Then we started financial peace university, and that made me feel even more defeated! We had to take a realistic look at our finances and see where we stood. Now that college degree that I was so determined to get [that I’ll likely never really use] costs a lot of money! We want to buy a house in 5 years or so. We knew that we had to get serious!

Part of that was Chris changing jobs, which has been a huge blessing! But I knew that I needed to contribute something, and I had to be able to work at home since I’m homeschooling and Baby M is still exclusively nursing. So first I started small. I started my swagbucks account, and my goodness I threw everything I had at that sucker! Chris’s account and mine were getting huge amounts of “swagbucks” and we were putting them towards amazon which helped to pay for some homeschool curriculum or other things that we need. [Right now it’s being tucked away for Christmas!]

Then, by doing more research I found MTurk, which is run by amazon. It’s essentially a marketplace where you do simple tasks that a computer can’t do. Mostly I google keywords and find a specific URL to know the page and rank. Dead simple. Does it make a lot of money? No. Is it mind numbing? Yes. But, I can do it while my kids are playing, or while I’m watching tv, so I don’t mind the small “wage”.

Then just today I got accepted as a freelance writer for domainite. There isn’t a whole lot of information on them online, so I’m treading carefully. I wrote my first content for them today, and I’m [im]patiently waiting for feedback. With this company you can accept a writing task with very specific instructions [including SEO information] and you write the content for them. They pay you $1/100 words written. Today I wrote 1500 words for a website’s content. $15 for easy work I did while my kids were playing and watching Sid the Science Kid.

Are you a work at home mom? Or do you work outside the home? Maybe you stay home and focus solely on homemaking and homeschooling. Did you always think you would be where you are now?

5 Comments on My Work at Home Adventure