To the Mom Who Will Not Be a Short Order Cook

I’ve seen many pictures, blog posts, and statuses circling around social media stating “I will NOT be a short order cook”, or something to that extent. Many mothers are posting all about how they will have the ultimate control at dinner time and will not be bested by a picky toddler. Here’s my letter to the mom who will not be a short order cook, from an SPD mama 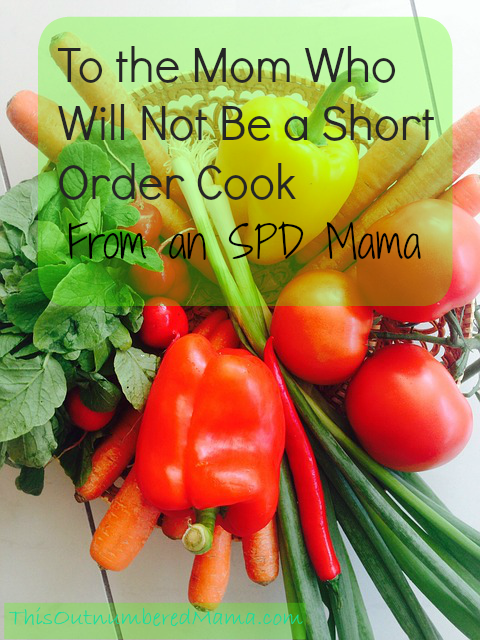 I pray that you never have to be a short order cook. I pray that your children always eat all their veggies in order to get their ice cream. My hope would be that you can say “eat this or eat nothing at all” at dinner time, and your child will eventually give in. Or at least they’ll eat breakfast the next morning. I am full of hope that your aversion to being a short order cook always overpowers your child’s aversion to all things green.

Sweet mama, I was just as determined to never be a short order cook. I looked down on moms who constantly gave in to giving their child whatever snack ten minutes after they refused their well balanced meal. I was sure that I would never, ever, let my children behave in such a way, or have such a fit over something as silly as food. I mean, they should be grateful they’re fed, shouldn’t they?

Oh how I wish I knew this years ago, well before I had a son who would only eat chicken nuggets if they were from McDonald’s or Banquet. A son who will devour nearly any fruit, but will not go near a vegetable. A son who has a panic attack if he is presented with pasta. Because it isn’t behavior. It isn’t a fit. Many SPD kids have serious meltdowns where they lose complete control when faced with different textures. Maybe if I knew that, I wouldn’t have listened to the well-meaning friends, family, doctors, and even strangers telling me “if that’s all you give him he will eat it”.

Maybe if I knew this earlier, I would look at those moms with a child throwing a tantrum over a cracker with compassion and understanding instead of superiority. Maybe I would have smiled at the child whose senses were so overloaded that they were losing control instead of judging them as “spoiled”. Maybe I would have recognized that lack of control in my own son, instead of believing that it was defiance as I did for so long.

Again, I pray that you are always able to deny short order requests. I pray that you are able to tell your child “no dessert unless you eat your veggies”, and it prompts your child to eat said veggies. However, I also pray that next time you see a mom giving yet another cracker to her tantrum throwing toddler, you offer her a smile instead of judgement. I pray that you have patience for the parents who don’t really want to accept dinner invitations because they doubt you will be serving something their child eats, and bringing their own food would be rude. Overall, mama, just have patience for others who are short order cooks.

So what do you think? Are you a short order cook, or do your children eat what you serve no matter what?

[And for my 30 thankful days, I’ve been thankful for my house, my family, and Chris!]