Is it a Tantrum or a Sensory Meltdown? 4 Ways to Know For Sure! - Autistic Mama

We’ve all been there.

We’re in the way-too-long check out line at Target and there’s a little kid there just screaming. Flailing. Kicking.

He wants that candy bar, his mom said no, and he is going to make her pay.

Strangers are staring at her, she’s flustered, and she keeps saying “do I need to take you to the car?”.

We all know that’s an empty threat because she’s in line with a cart full of stuff she needs, and if she could just get him to cooperate for a minute they’d make it out alive.

So she gives in.

She grabs him the candy-bar, and suddenly the world is better.

Her boy is back to his happy demeanor and is excited to dive into his chocolatey treat the second the cashier hands it back to them.

Is it a Tantrum or a Sensory Meltdown? 4 Ways to Know For Sure! 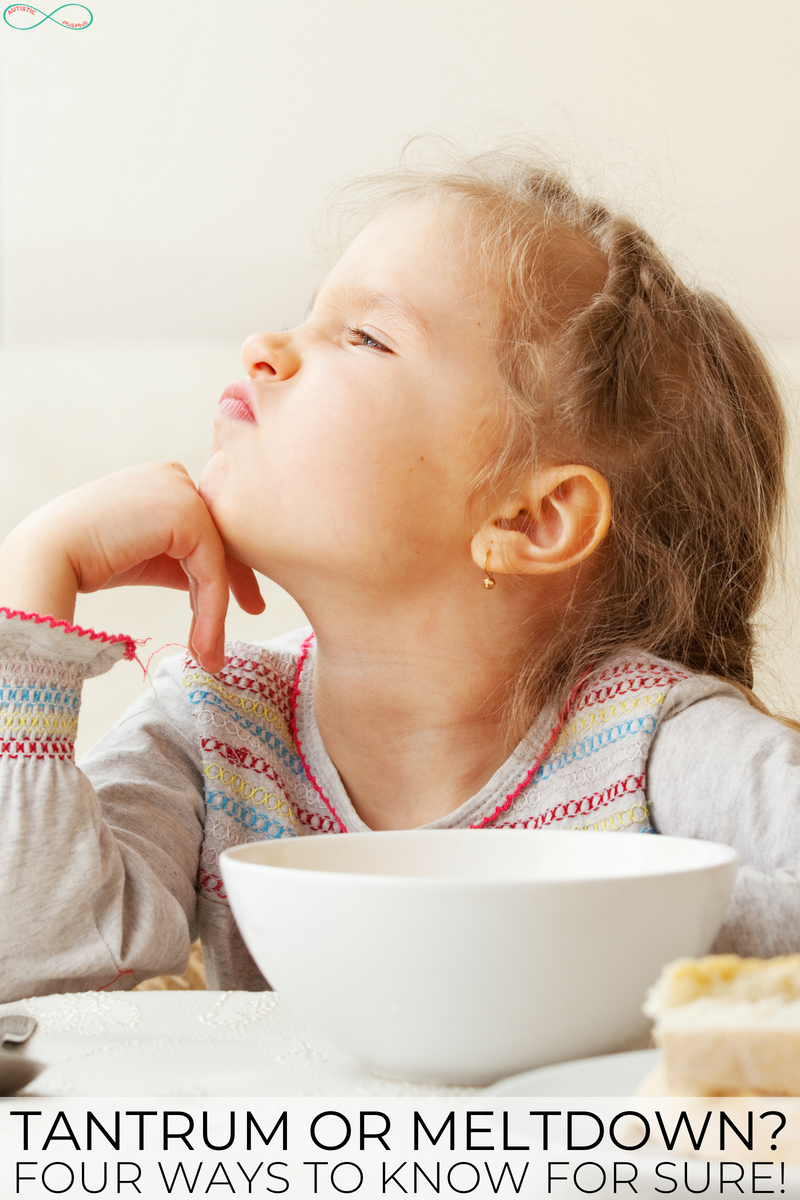 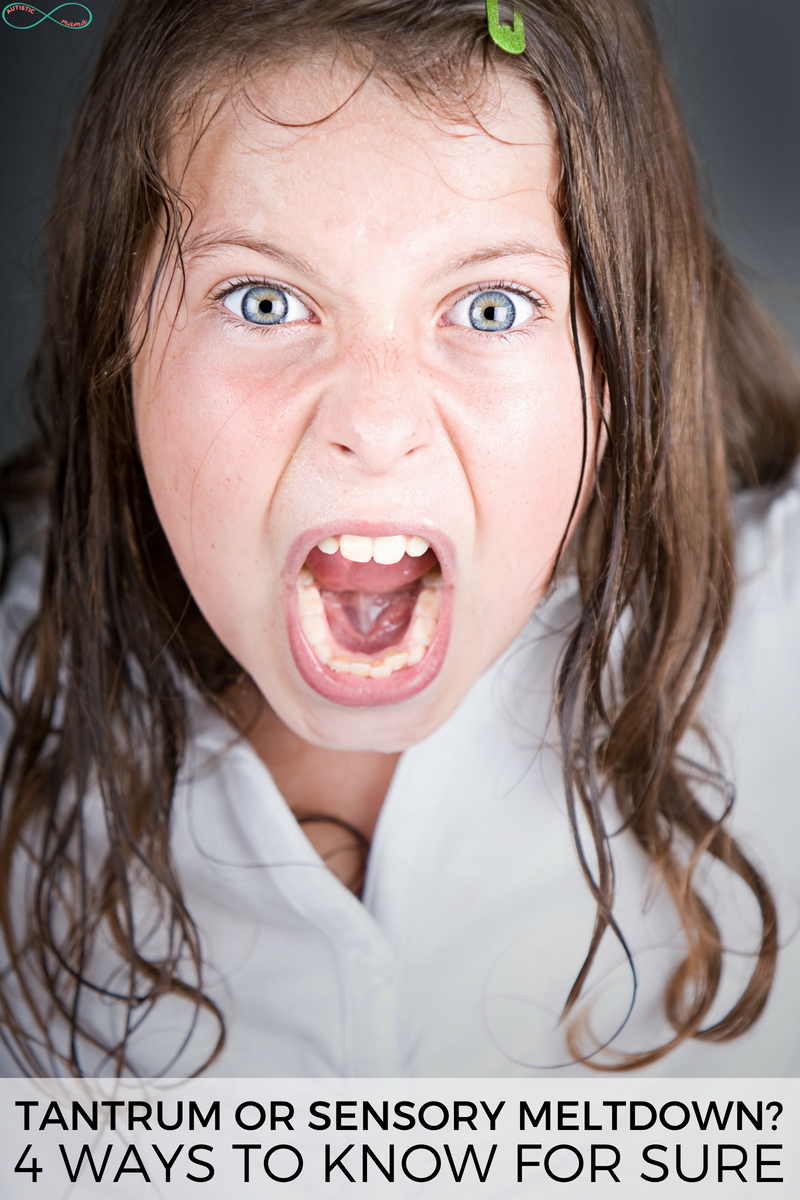 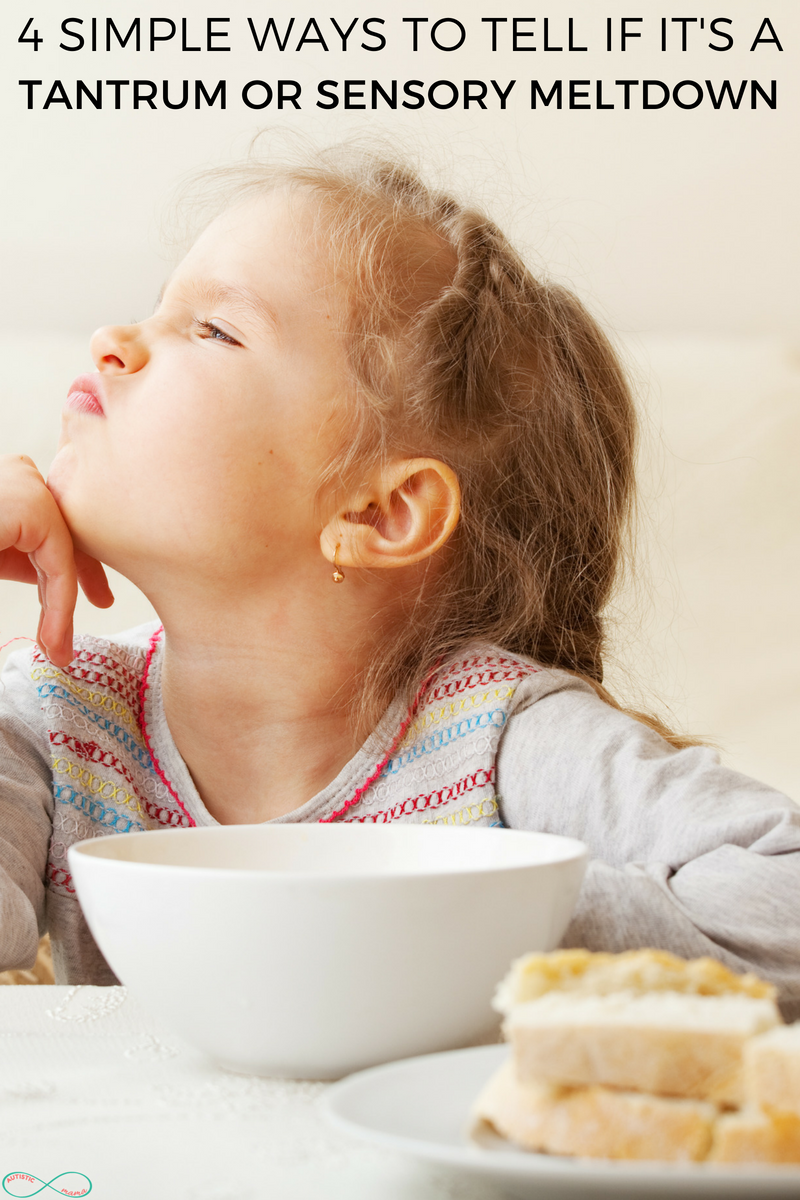 This, my friends, is a tantrum.

They happen to the best of us, and we spend the better part of our children’s toddler and preschool years trying to teach them not to do this.

So what, then, is a sensory meltdown?

A boy with his mom in target who asked for a candy bar and was told no.

The screaming, flailing, and kicking occur, but even when the mom gives in, the boy doesn’t stop.

He continues the fit well after the mom gave in to the original request, and often well after they even get to the car and drive home.

This wasn’t even caused by the candy at all, that was simply a trigger that set it off.

This is a sensory meltdown.

Preventing them is an entirely different ballgame as well.

So when you’re in the thick of it, how do you tell the difference? 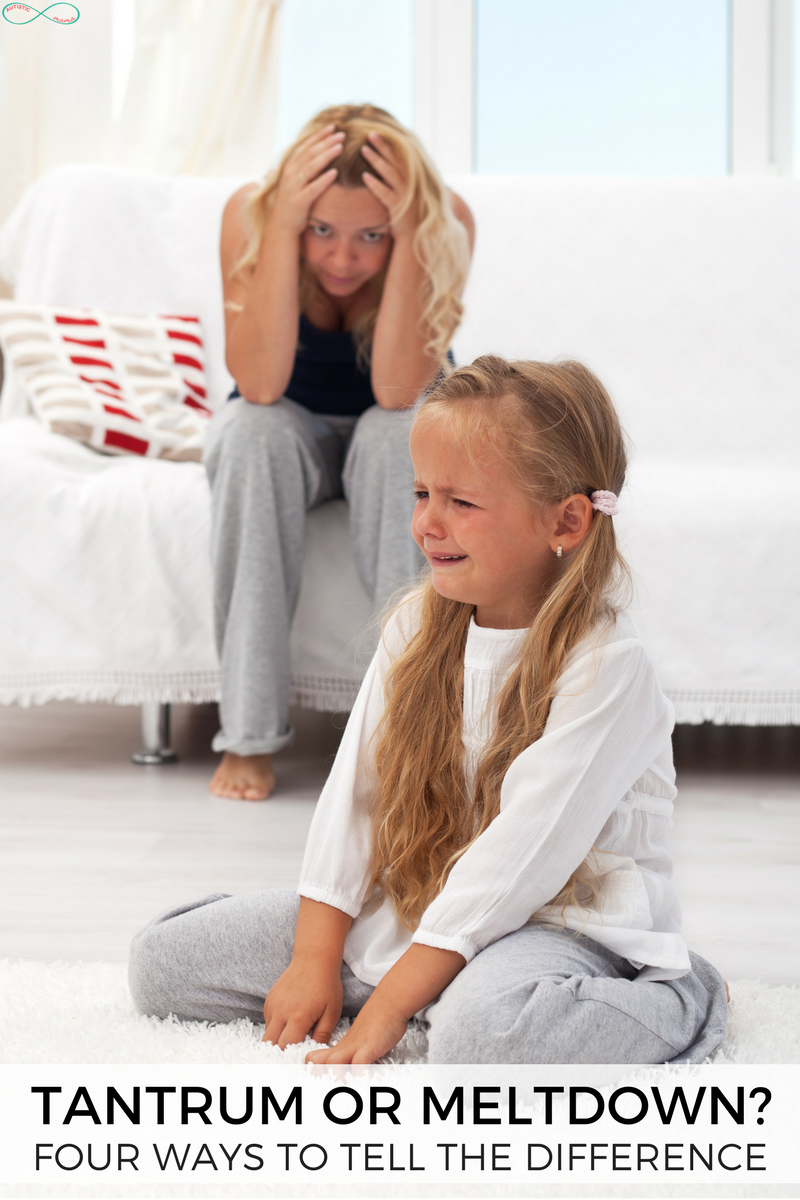 A Tantrum is Bad Behavior, a Sensory Meltdown is Neurological

They wanted something and were told no, so they are going to throw a fit.

Their friend took their toy, so they’re mad.

Tantrums are always about something they don’t like, that they want fixed.

A sensory meltdown is caused by neurology.

A child with sensory processing disorder or autism doesn’t choose to get overwhelmed.

Their brains are wired differently so that they interpret their senses differently than neurotypical people, so to them it is literally painful to endure certain situations.

Their body’s fight or flight system kicks in, and when fight wins we end up with a sensory meltdown.

A Tantrum is For Attention, a Sensory Meltdown Isn’t

We’ve all seen a child throwing a tantrum and taking every chance they get to watch their mom’s reaction.

A tantrum can be fueled by the attention it receives, so many experts advise moms to ignore the child during the tantrum.

As a mama of four, I can tell you, this works with tantrums! Ignore them.

If you’re at home, go to another room. If you’re out and about, you will get mean looks from strangers, but ignore them too.

A tantrum is only effective if it’s given enough attention to give the child their way, so don’t do it.

A sensory meltdown, however, doesn’t care about attention.

A child in the middle of a sensory meltdown will have no idea who is paying attention to them because they truly don’t have the energy to care. 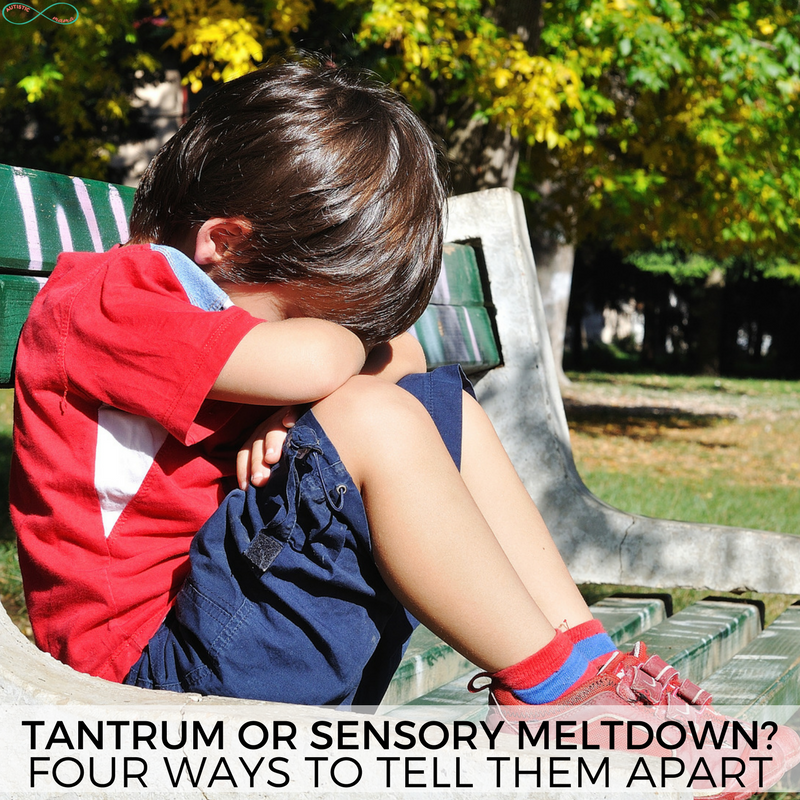 A Tantrum Stops if You Give In, a Sensory Meltdown Doesn’t

If a child is throwing a tantrum over a candy bar, and you give them that candy bar, the tantrum will stop.

It might take a bit for the child to realize that you’re giving in and calm down from the fit they’ve worked themselves into, but they will stop and enjoy their candy bar.

If a child is having a sensory meltdown triggered by being told no about a candy bar, giving in and letting them have the candy bar won’t help.

Because the candy bar was more like the tip of the iceberg.

Most sensory meltdowns are caused by a mountain of sensory overwhelm with one final trigger sending them over the edge.

(Related: Check out the vital steps to take with your child after a meltdown here)

A Tantrum Won’t Hurt The Child, a Sensory Meltdown Might

A child throwing a tantrum may “throw themselves” to the floor, but if you watch closely they will often catch themselves before they hit the floor and be a bit more gentle.

They may hit themselves or things around them, but they won’t do so with enough force to do any real harm. (Plus, it’s almost always done while watching mom for a reaction)

A child in the middle of a sensory meltdown can often lose control.

If they fall to the floor, they’re hitting it hard. If they hit themselves, it’s truly hurting them.

Like I mentioned above, a child going through a sensory meltdown is really going through every sensory trigger they’ve experienced all day, so they are often not even aware of what they’re doing during the meltdown. 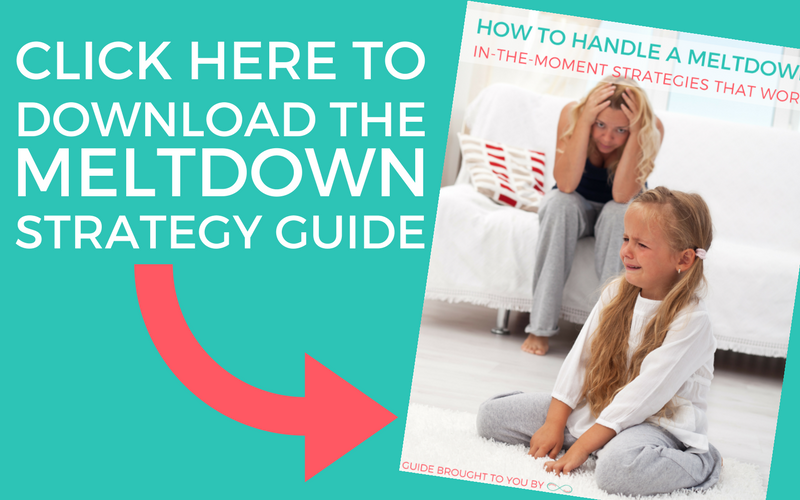 Sensory meltdowns are a really frustrating part of sensory processing disorder, and as parents, we are always doing our best to support and help our children through them.

But it can still be really frustrating when people out in public don’t fully understand our kiddos.

Sometimes their stares just feel like too much. Sometimes the off-handed comments really get to us. “My kid would never act like that in a store” “This is what’s wrong with this generation” “That kid needs a good swat”.

I know, it gets so frustrating and you sometimes just want to scream at them.

Why can’t they understand?

Well, believe it or not, they’re not actually heartless people (at least most aren’t) but they simply don’t know anything about sensory meltdowns.

Of course, we want to help educate people and advocate for our kids at the same time, but in the moment it can be impossible to find the right words.

You can print some off and keep them in your wallet or purse to give out when your child is struggling through a meltdown.

Hopefully, they’ll walk away with a better understanding that allows them to be more compassionate the next time they witness a meltdown.

Oh, and with the sensory meltdown awareness cards, you’ll also get a Tantrum or Sensory Meltdown Cheat Sheet for Parents as a bonus!

This sheet will help remind you each day how to tell the differences between a tantrum and a sensory meltdown. 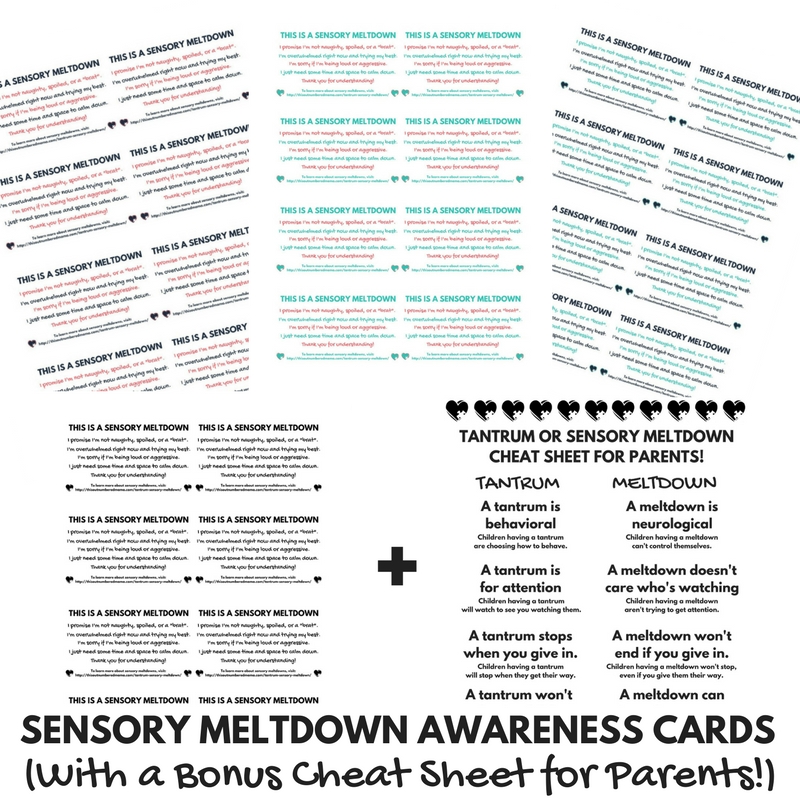 If you loved this post, you should also check out: 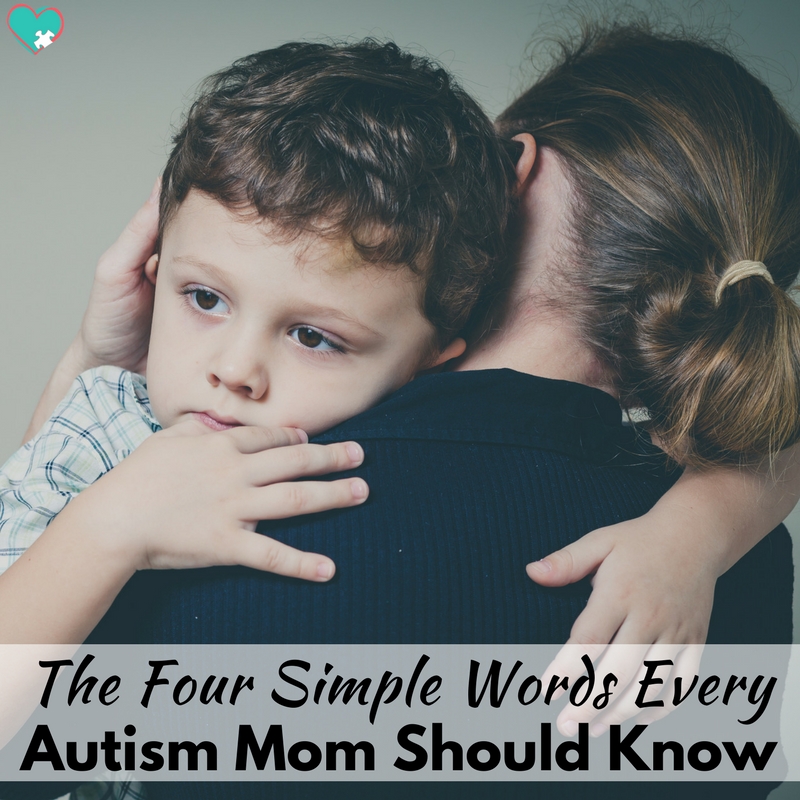 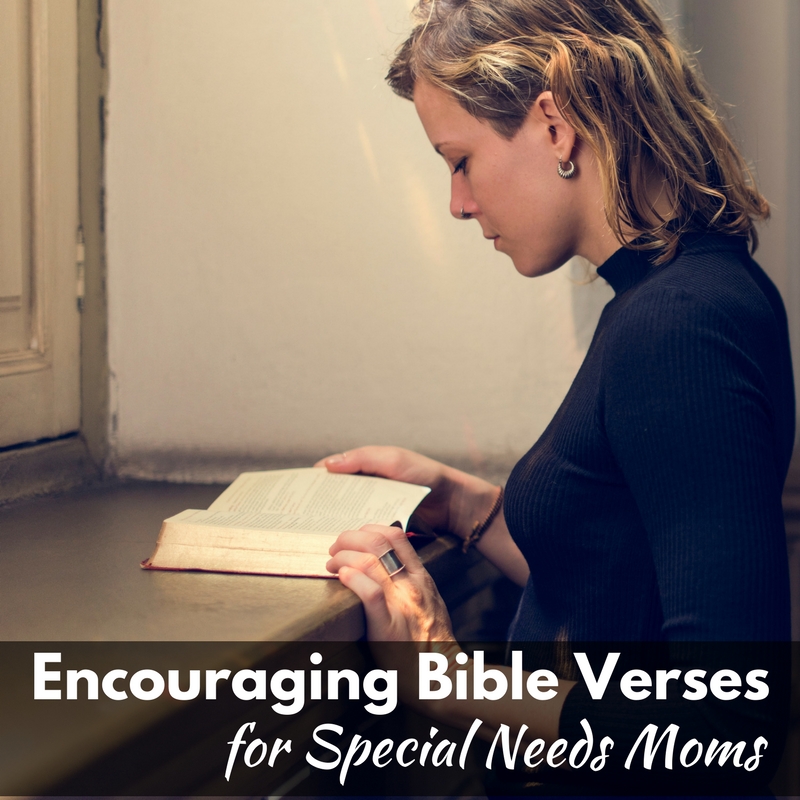 47 Comments on Is it a Tantrum or a Sensory Meltdown? 4 Ways to Know For Sure!