3 Simple Reasons to Use Identity Language With the Autistic Community

(Inside: Check out these 3 simple reasons to use identity language when referring to the autistic community, from an autistic mom of an autistic kiddo!)

As a mom of two disabled children, I was shocked to find that there is so much controversy over what exactly we say.

I’m not talking about the basics, like not using the R word.. That’s a whole other post in itself.

Do we say special needs, disabled, differently-abled, or what?

I obviously didn’t want to be using any language that would be offensive to anyone, and just like with the autism organizations, I did my research.

This is where things got interesting.

As I did more and more research, it seems that [I’m generalizing big time here] parents of children with special needs/disabilities/etc tend to prefer person first language. However, from what I’ve found, disabled self-advocates tend to prefer identity language.

*Note, since writing this post, I’ve learned that I’m also autistic. At the time of writing I was unaware*

3 Simple Reasons to Use Identity Language For Autistics 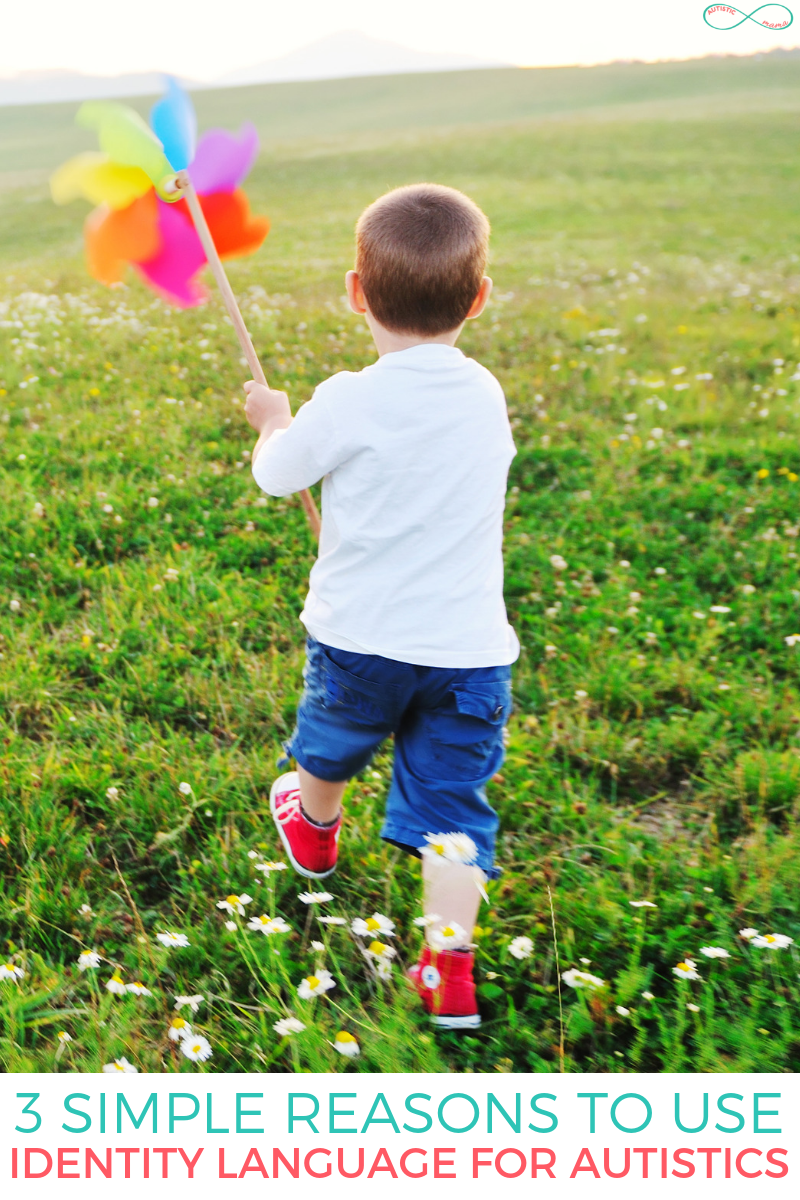 (Image description: Boy running in a grassy field carrying a pinwheel. At the bottom, teal and coral text on a white background reads: “3 Simple Reasons to Use Identity Language for Autistics”. Teal and Coral “Autistic Mama” Infinity logo in the top right corner) 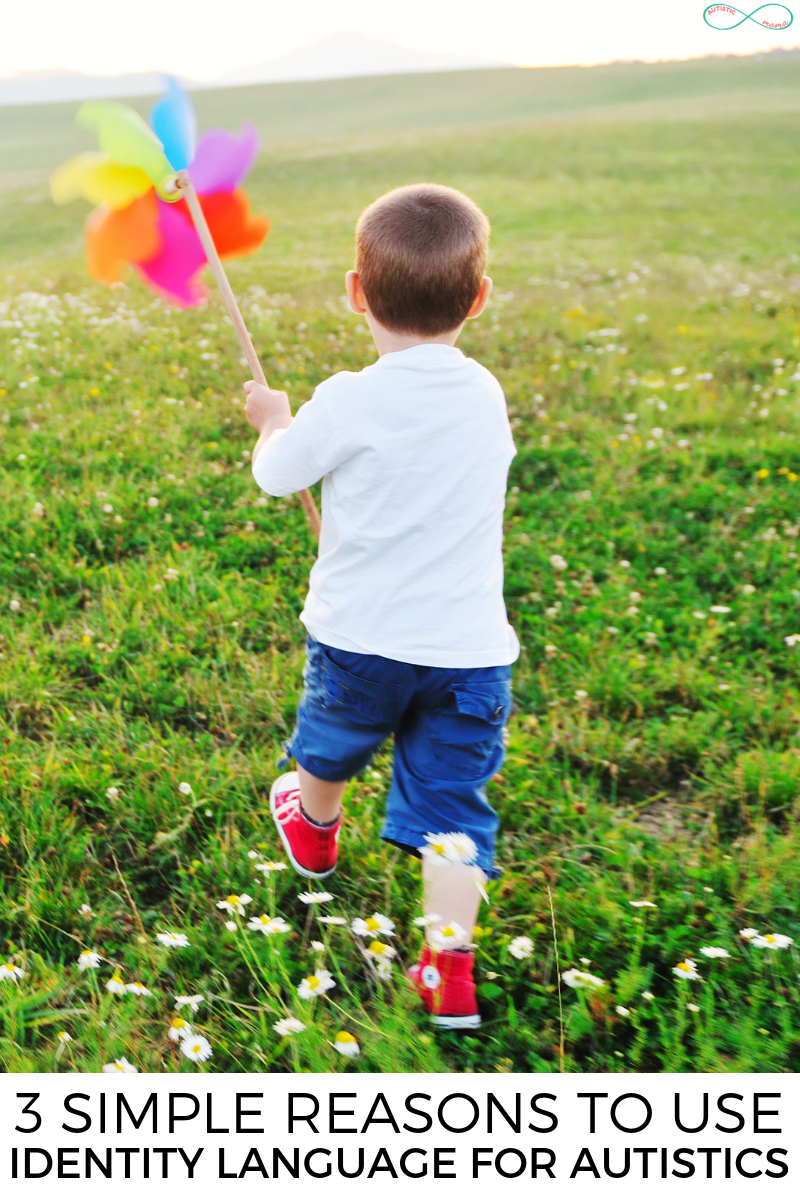 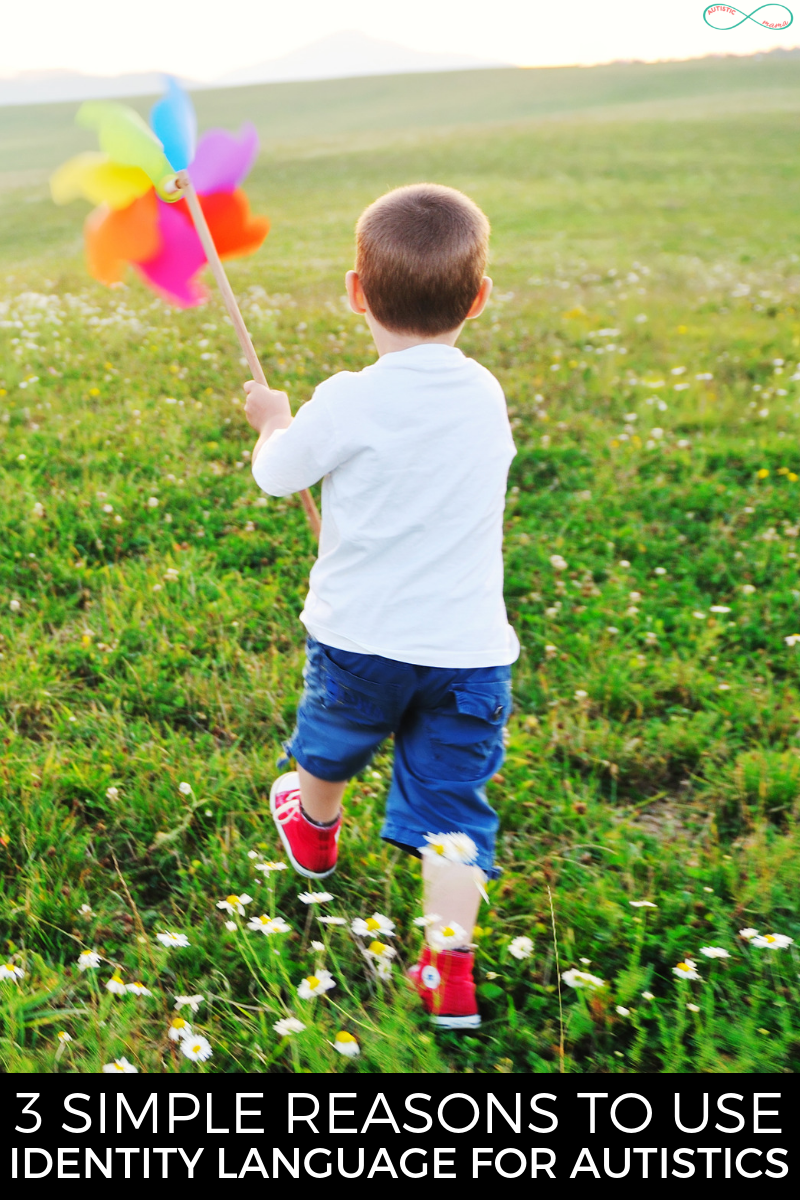 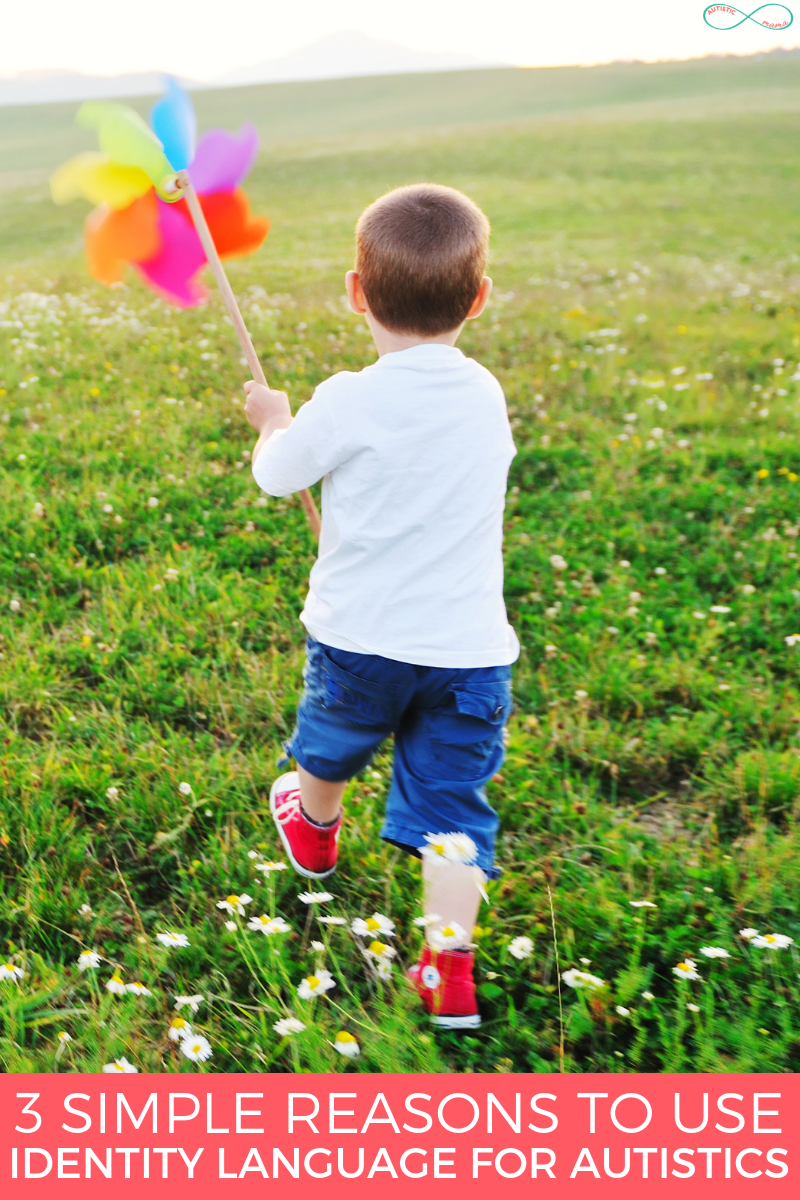 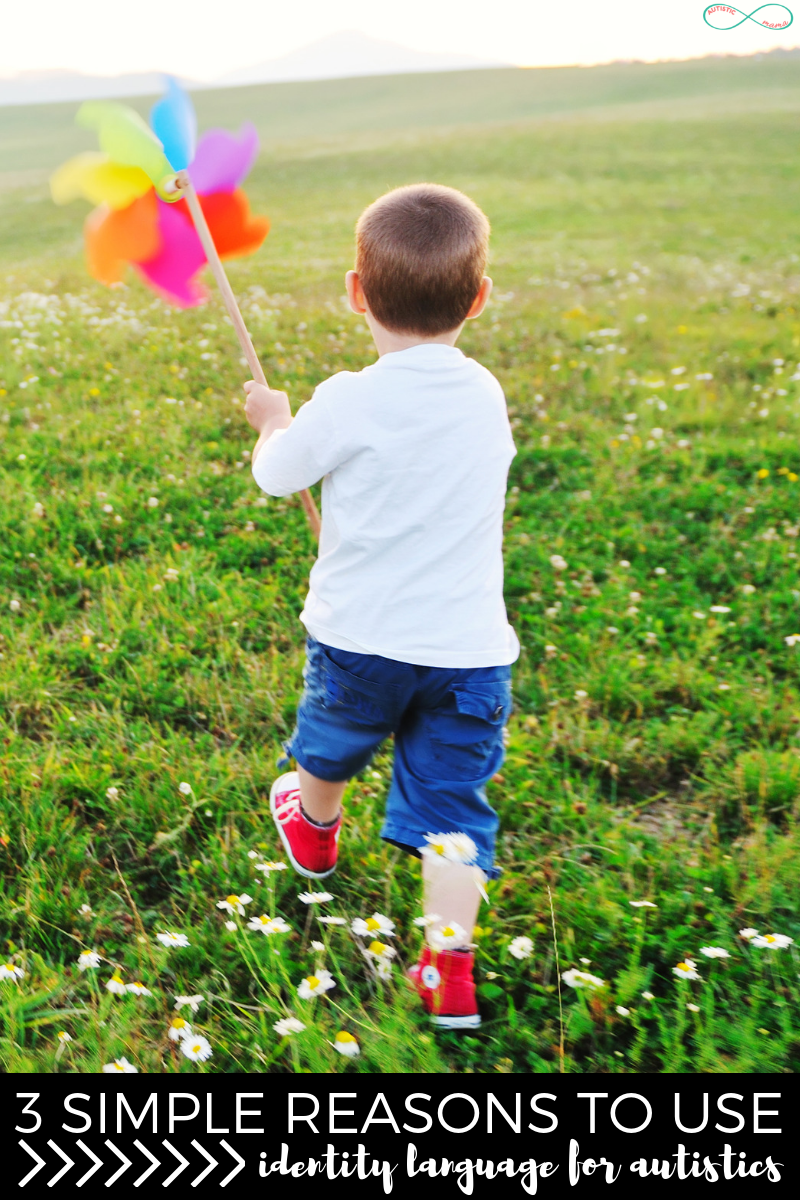 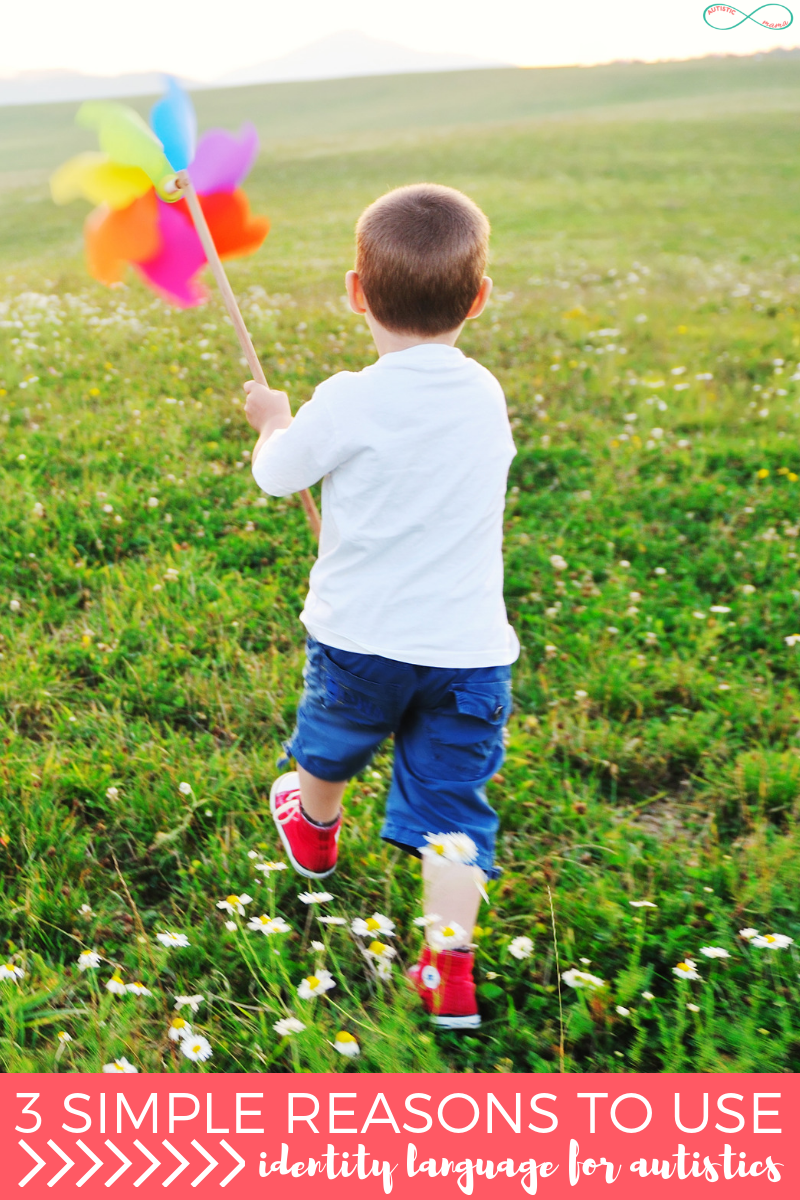 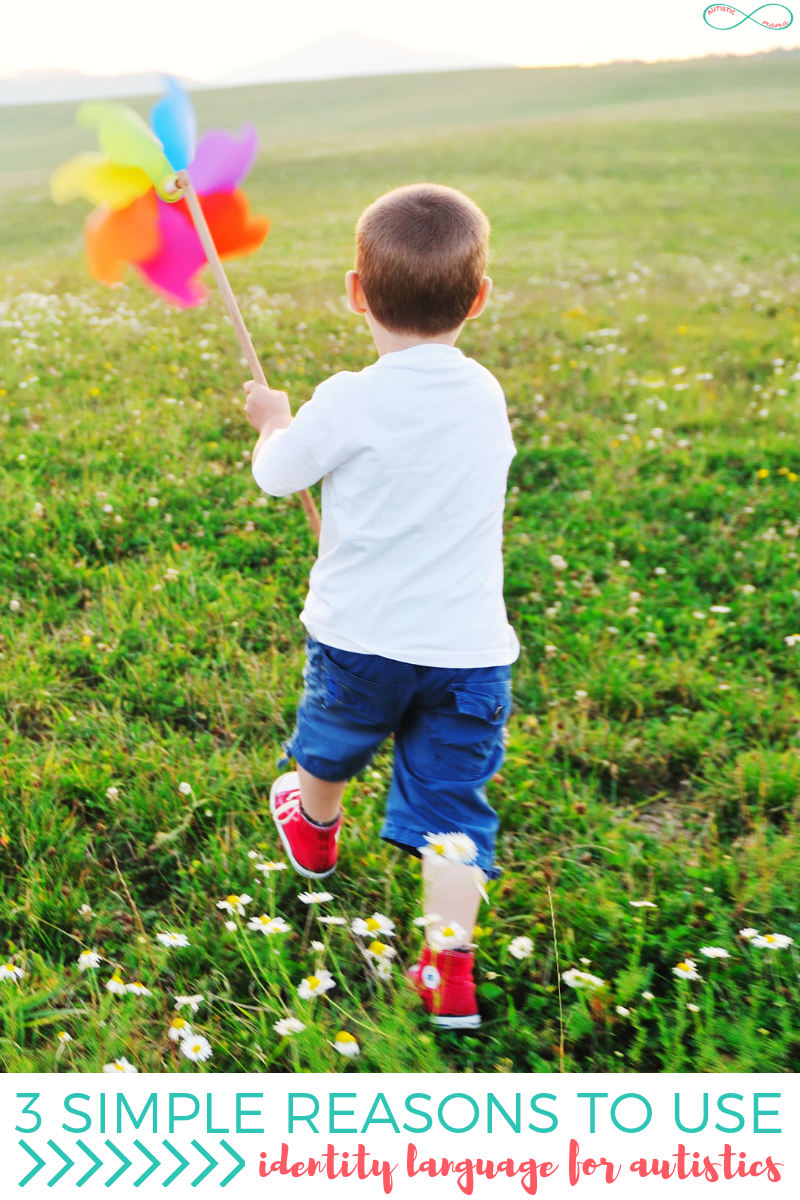 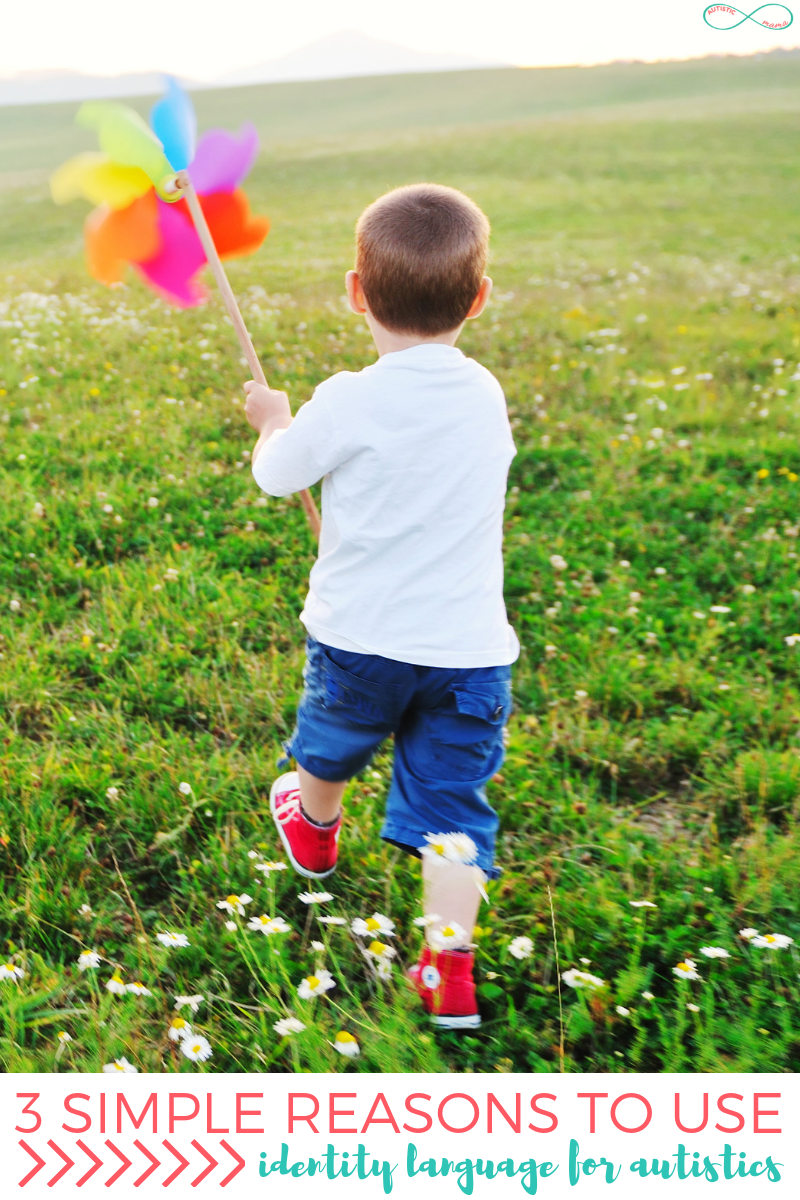 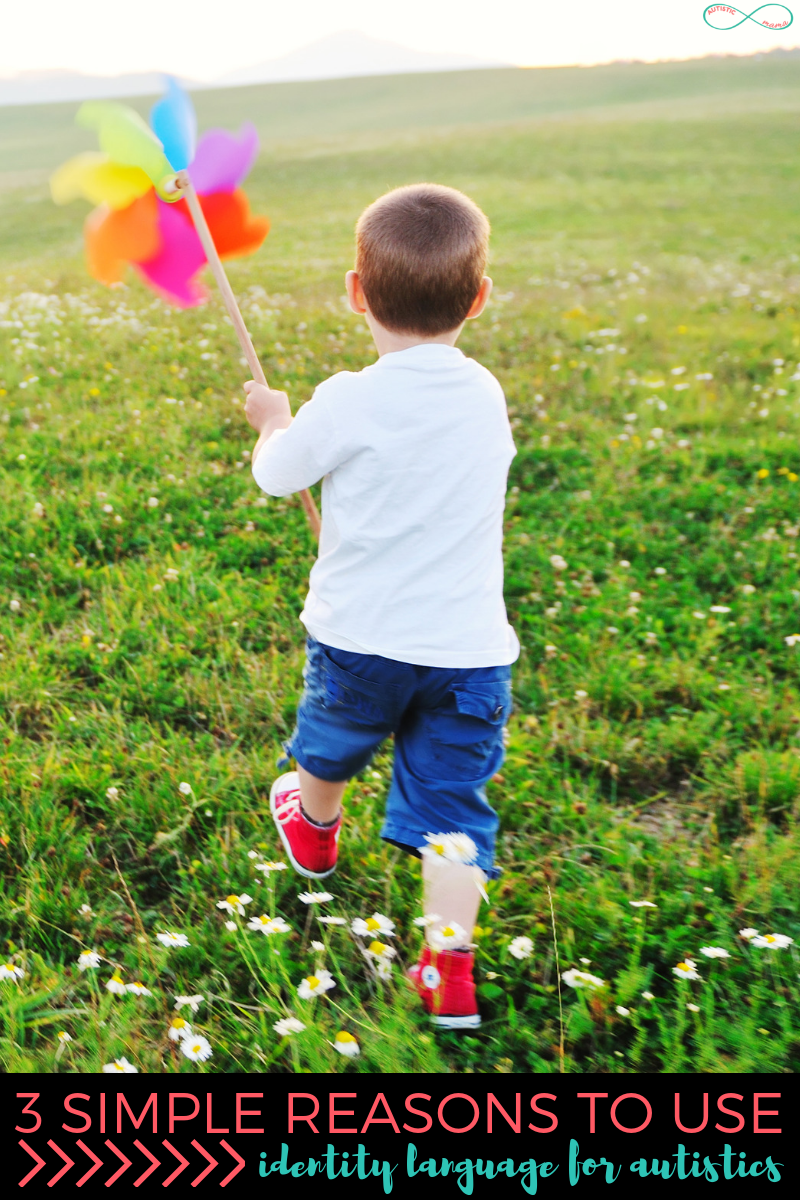 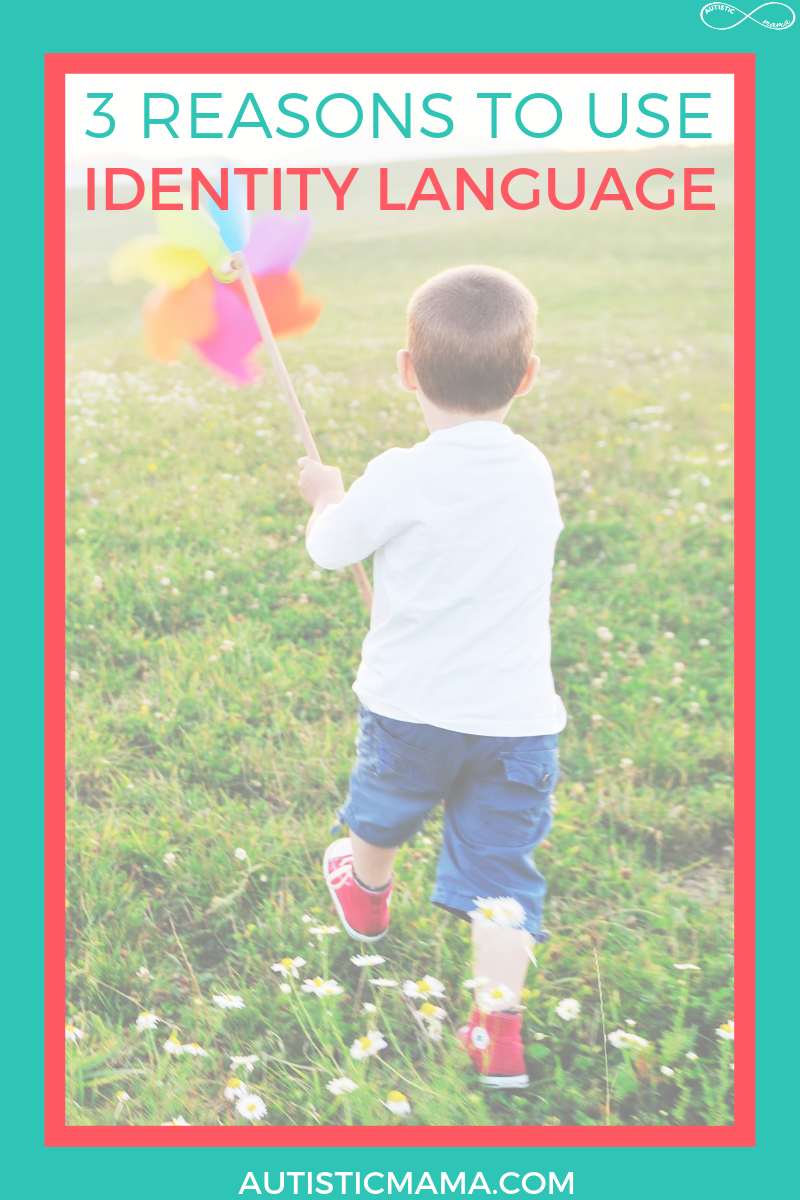 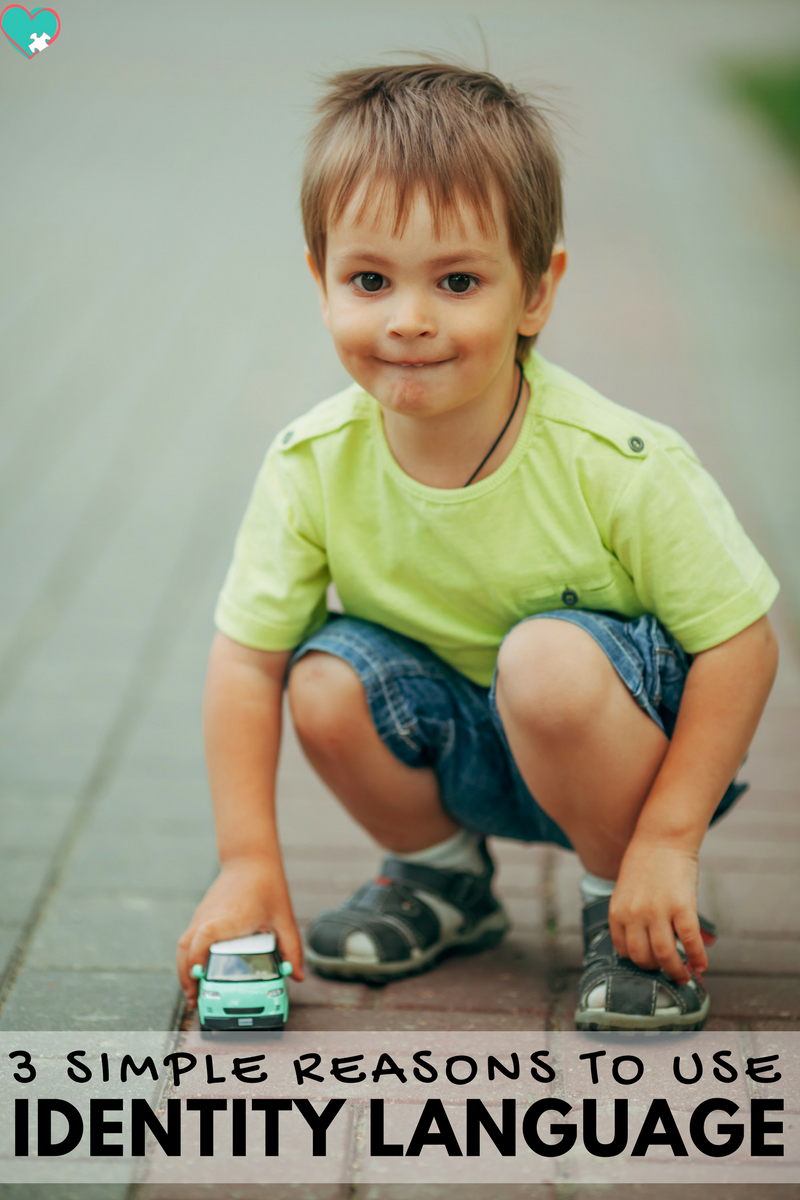 There’s Nothing “Wrong” With Disabilities

I genuinely feel like there is absolutely nothing wrong with A-Man.

He isn’t sick. He doesn’t have cancer.

He doesn’t need a “cure” for something that is a part of what makes him who he is.

I believe that person-first language can unintentionally add to the stigma of disabilities.

If you feel the need to tell me 3 facts about a person before you bring up that they also have Autism, I am going to guess that you’re still pretty upset about the Autism.

We Know That They’re a Person

We don’t really need to be reminded that a disabled person is a person.

We know that being autistic or being dyspraxic is just a tiny part of what makes them who they are.

If you feel the need to be reminded, or to remind everyone, that your child is a person before a disorder, that makes me really sad.

I have never been in a situation where anyone has ever heard that A-Man is autistic and then thought that completely negated his love of trains and fairies and the fact that he could sing you any song from frozen without missing one word.

I am a female, white, a mother, a daughter, a friend, an American, neurotypical (see note above), and fifty other things that describe me.

However, I am those things, and they all work together to make me who I am.

A-Man is a male, white, a son, a brother, a friend, autistic, dyspraxic, and (because they don’t have an -ic word for it) he has sensory processing disorder.

All of these things play a role in making him the sweet and funny little boy that he is.

His speech therapist once told us that all of his diagnoses are descriptive, not prescriptive. They give us an idea of where he’s at, they do not tell us who he is or where he’ll eventually be.

Of course, there are definitely times when I use person first language.

I use it when referring to people with Down Syndrome because the overwhelming majority of people in the Down Syndrome community prefer person-first language.

I am absolutely not saying that everyone should use identity language, but I really feel that it should be up to each individual.

When A-Man is old enough to understand and decide, he will choose and I will respect his choice.

Until then, I will use identity language which I’ve heard many autistic people use with pride.

What are your thoughts? What language do you use for yourself/your child?