First of all, sorry for being so MIA this week! My internet has been crashing like crazy. Thankfully we seem to be back up for good now! Now, last week I posted part one of this series about the whys of our homeschool routine, then the series was interrupted by some tragic events that happened in my home state. Now, we’re back on course with how we use our homeschool routine to get all of our homeschooling done without a schedule!

How We Do Our Homeschool Routine 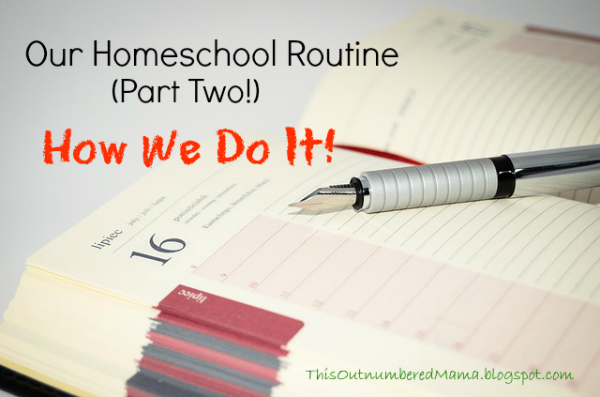 And the usual disclaimer that this is what works for my home, and my homeschool. What works for you may be completely different! That’s okay! Everyone’s family and home and homeschool will be different. Isn’t that why we homeschool? :)


We [try] to wake up at the same time[ish] every morning.

As you may have sensed from the headline, this is still a work in progress! Chris works late, so I get to bed late, so I don’t want to wake up in the morning. However, Mr. C works best in the early mornings right when he wakes up. If I put school off until the afternoon he is a crabby mess, and our entire homeschool routine is thrown off. So, we’re working on getting up earlier and starting school right away. [blech] But I have been seeing some benefits with this. School goes much smoother with a lot less whining. It’s done first thing in the day before lunch and their nap/rest time, so after they rest we’re free to do whatever.. [read:watch Frozen again..] We’re also getting more done because we aren’t rushed.


We do independent subjects first.

Like I mentioned above, Mr. C is a morning kiddo. I am not. So how do we handle this in the morning before my cup 3 cups of coffee have kicked in? He does all of the subjects that he does on his own first. [Yes, my four year old does do some of his school work independently] This lets me get some much needed caffeine, feed the baby and get him settled somewhere, get some online work done [or facebook.. whatever, right?] and all around get myself ready for a day of homeschooling! There are exceptions. Wednesdays we pick up the boys at 10:30 from their ‘weekend’ at their dad’s. We typically start school as soon as they get home, but sometimes we’ll do the parent-intensive work first because after a nap it’s easier for him to do his independent subjects. We’re flexible, again, it’s a homeschool routine, not schedule!

We give ourselves grace.

Sometimes I need a reminder that Mr. C is four years old. We’re doing first grade curriculum for most subjects. The world will not end if we miss a reading lesson, or do flashcards in the car instead of a full blown math lesson. His future will not be over if I don’t complete every un-realistic pinterest worthy project I have planned for our unit study. And sometimes public school kids watch magic school bus instead of science lessons, too. Homeschooling is about so much more than getting all of the books read and all the assignments checked off. Sometimes we have to take some time off to deal with a behavior issue. Sometimes we all are burnt out and need a few days of Super Why, Magic School Bus, and Sid the Science Kid without a workbook in sight. It’s okay! We aren’t ruining our kids. Pinky Swear.

How do you make your homeschool routine work for you? Are you an early riser? Do you do school in the afternoons? I’d love to know!