5 Things Neurotypicals Do That Autistics Can't

My oldest child is not autistic, my younger son is.

It didn’t take me long to realize that because of that simple fact, society viewed their behaviors very differently.

Even the exact. same. behavior.

See, when my non-autistic child did something, I was encouraged to get to the bottom of why they did it and support them through it.

On the other hand, my autistic son’s behaviors were given two options.

Option 1: He does that because he’s autistic, ignore it.

Option 2: He does that because he’s autistic, therefore it’s a bad thing and should be stopped immediately.

Obviously, neither of those are great options. And this post isn’t about what to do about your autistic child’s behavior.

This post is about why my non-autistic child’s behaviors are seen as communication, or they’re seen as acceptable, or part of their personality.

While those same behaviors in my autistic son are pathologized and made out to be horrible traits that must be stopped.

And it boils down to one simple (and sad) truth of society… When autistics do it, it’s wrong. 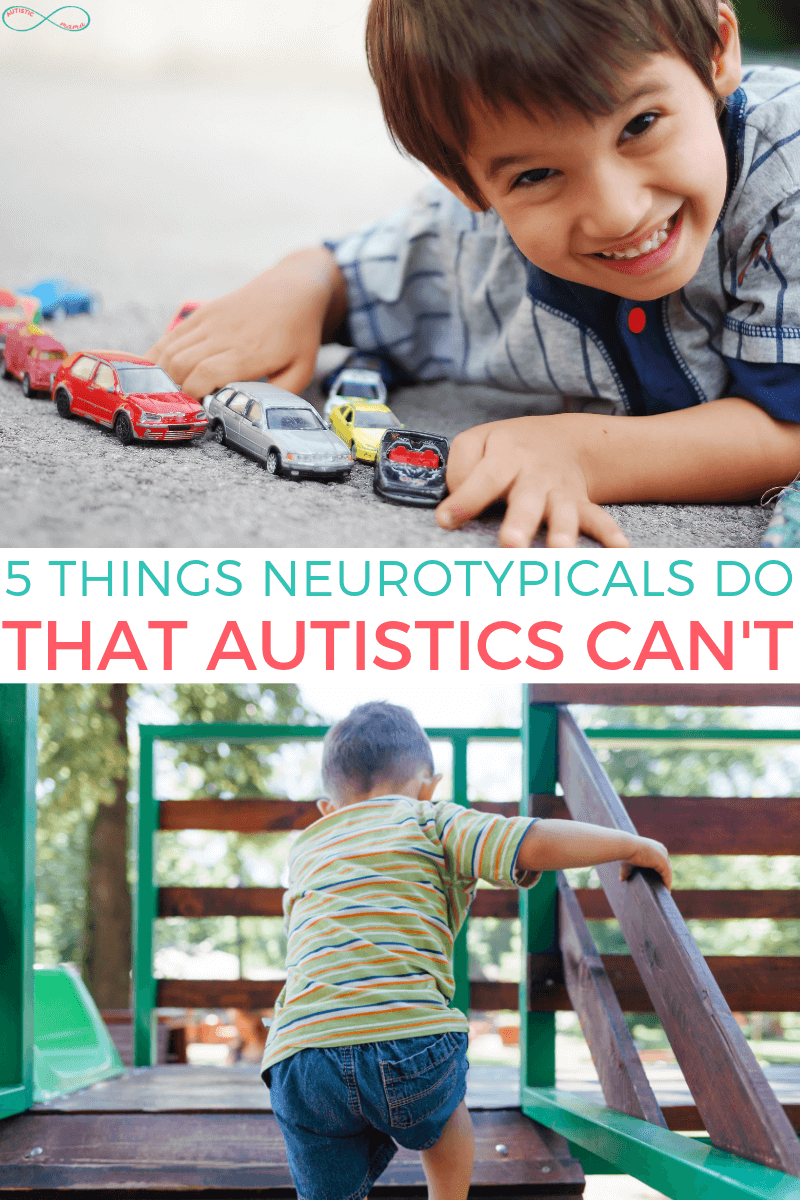 (Image description: Top half of image has a young boy smiling while playing with cars on the floor. In the center coral and teal text reads: “5 Things Neurotypicals Do That Autistics Can’t”. Bottom image has a young boy facing away from camera walking onto a play structure holding onto the rail. Teal and coral Autistic Mama infinity logo in top right corner.) 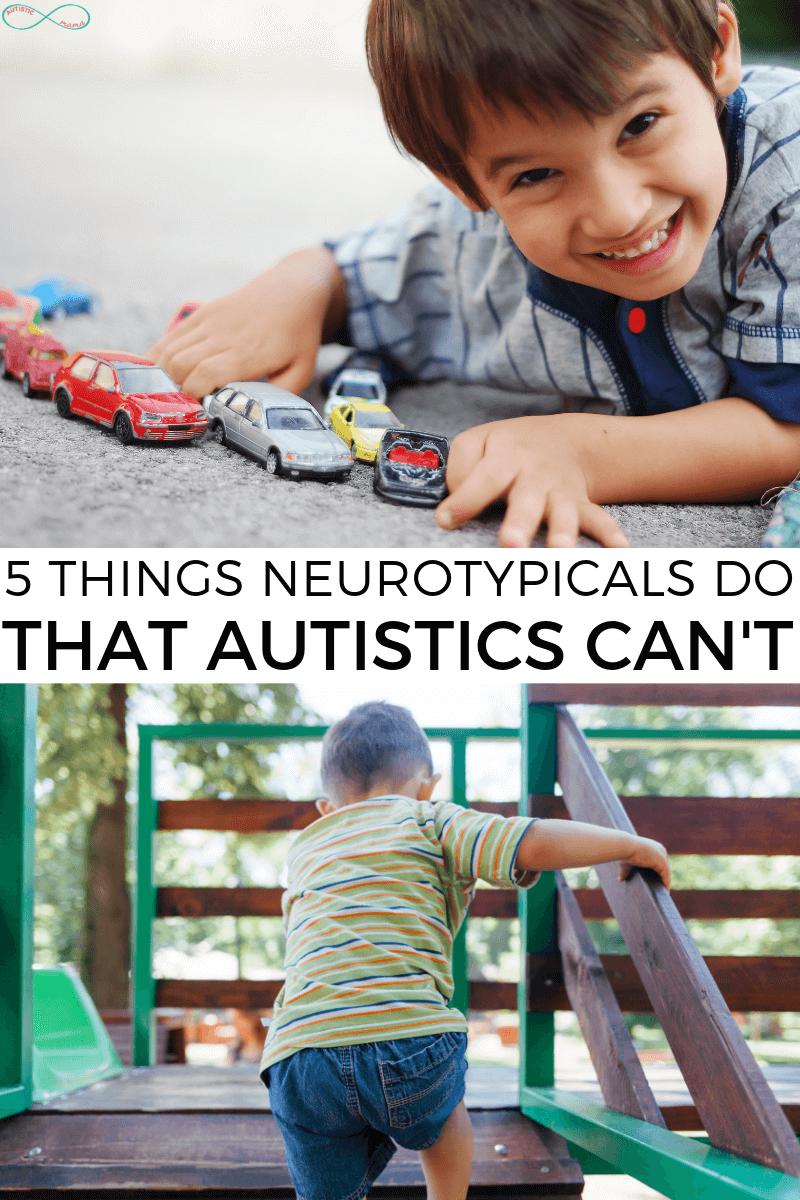 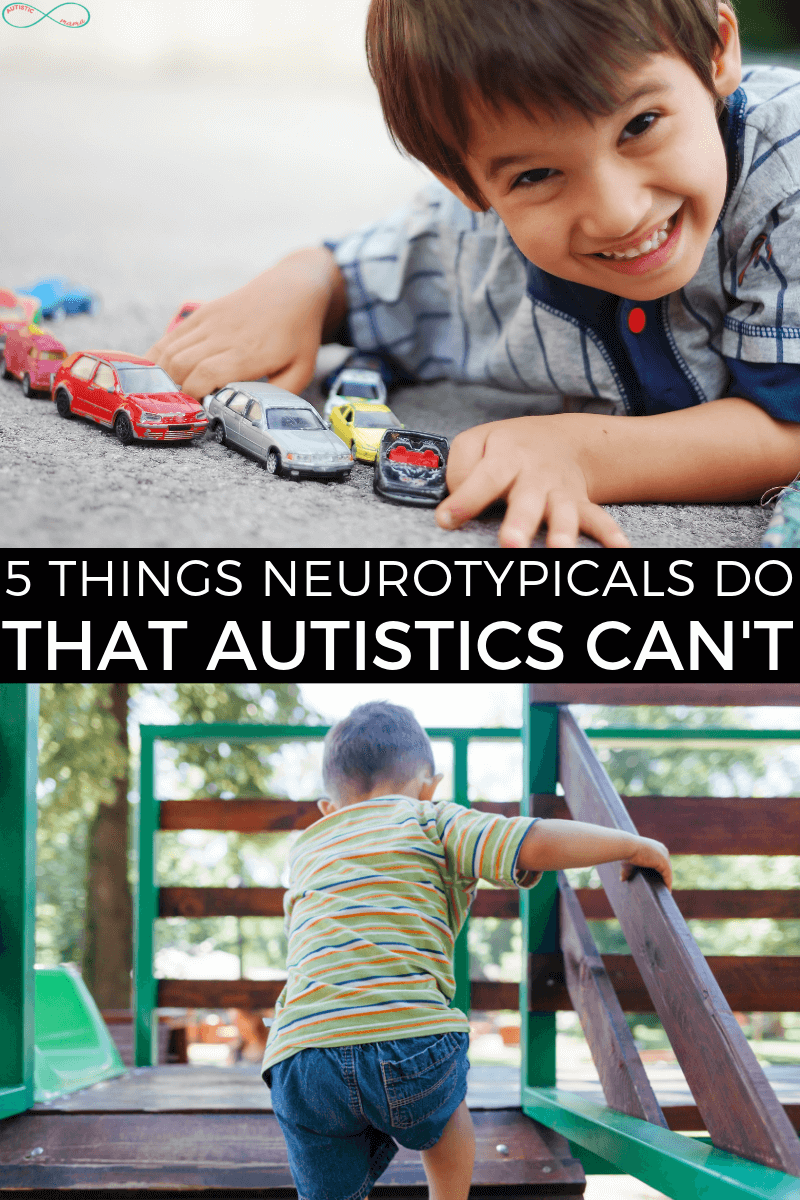 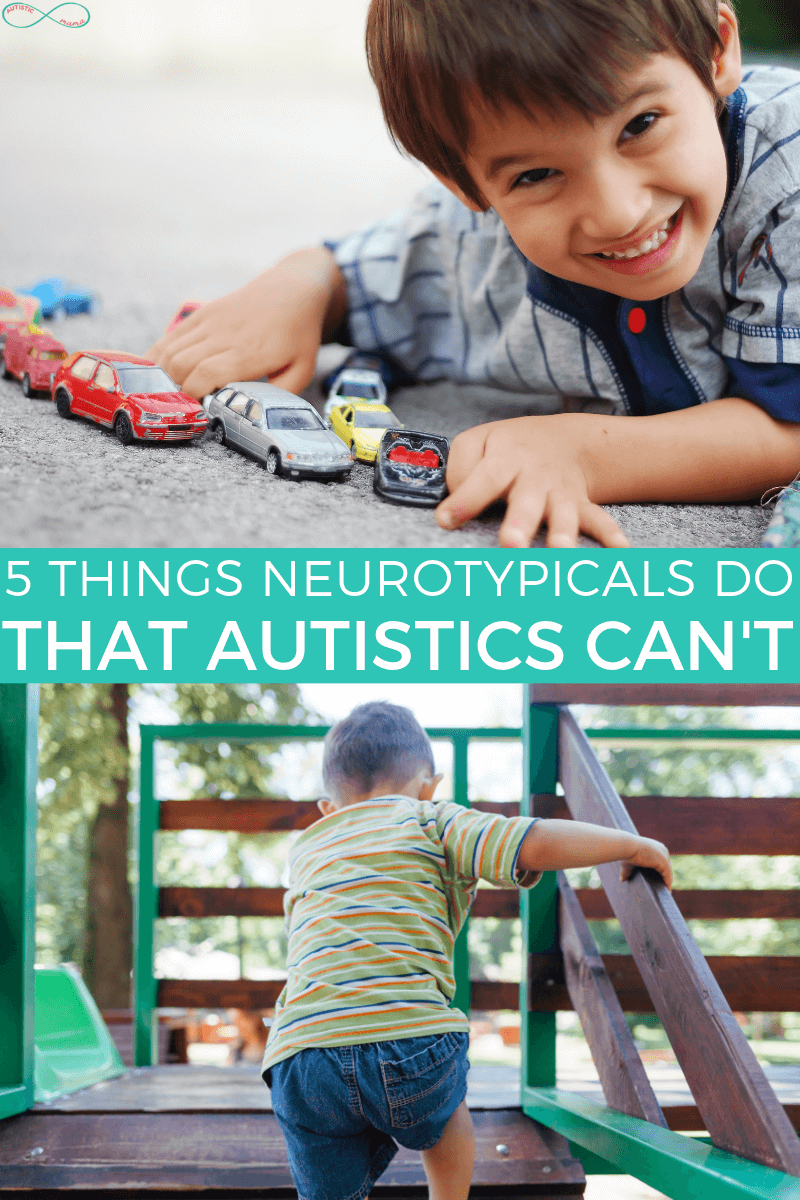 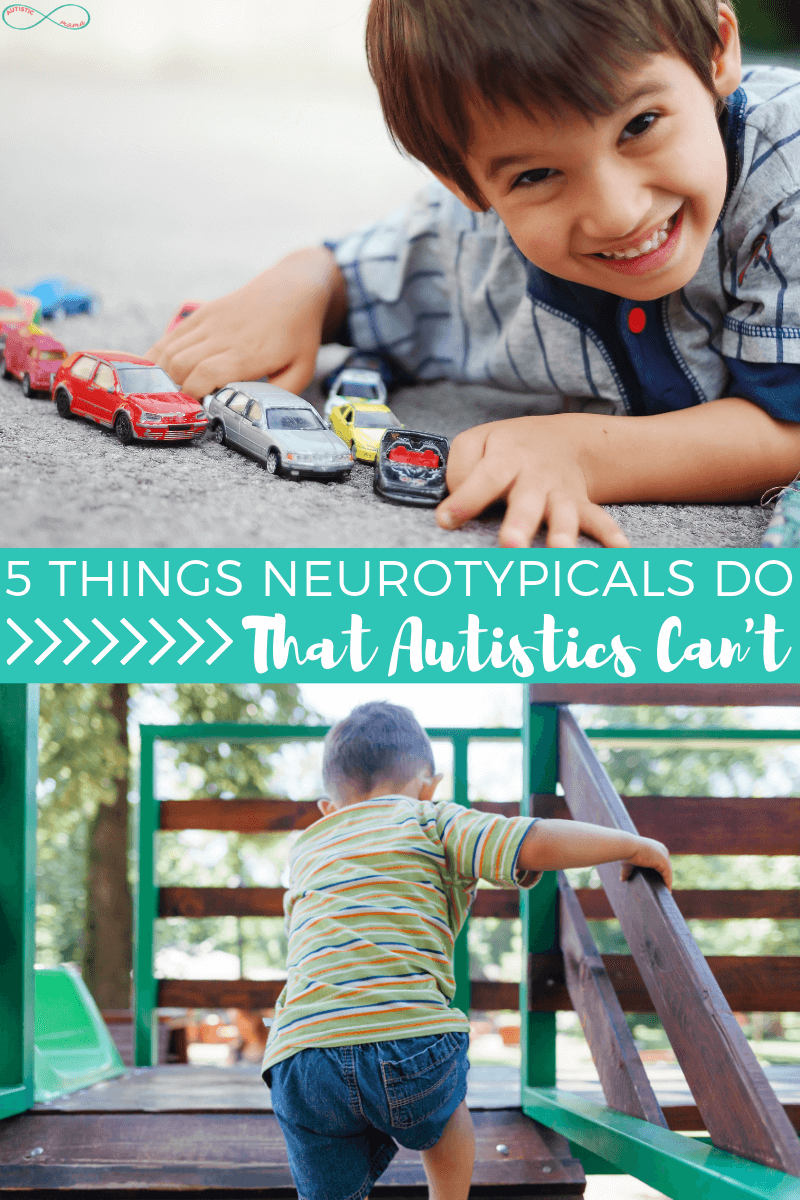 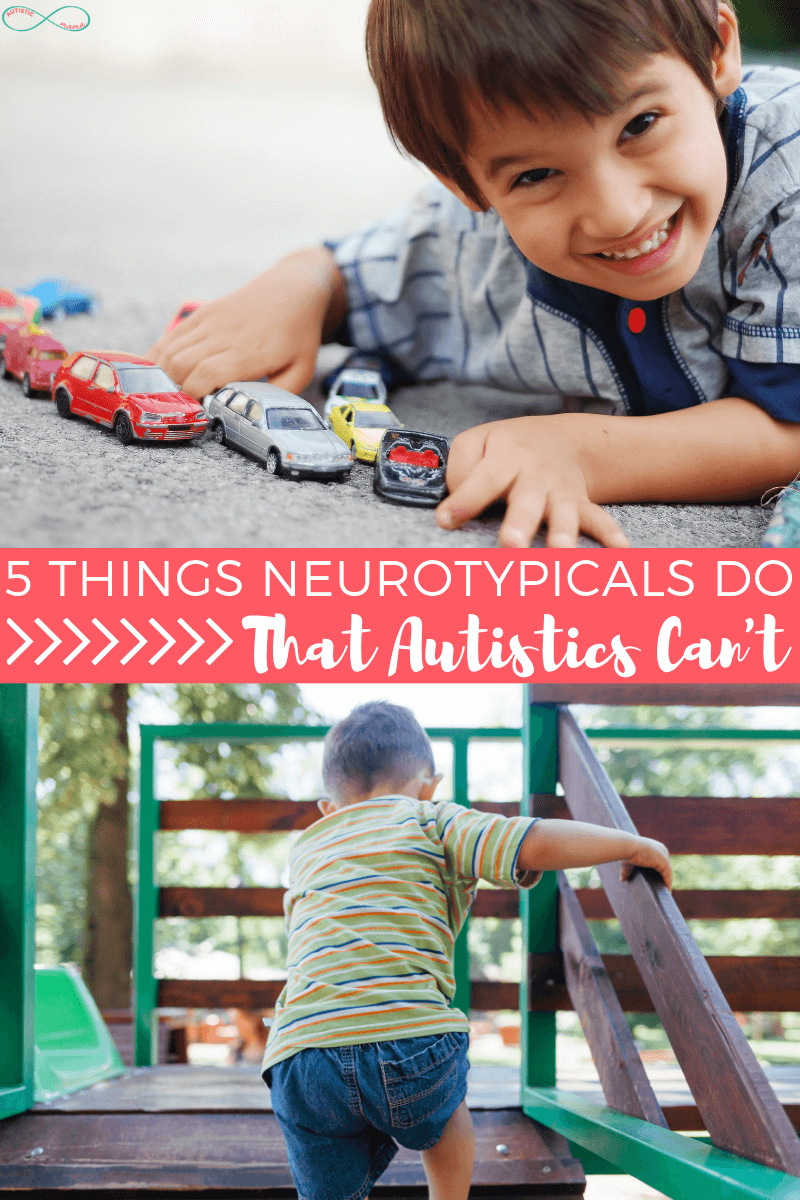 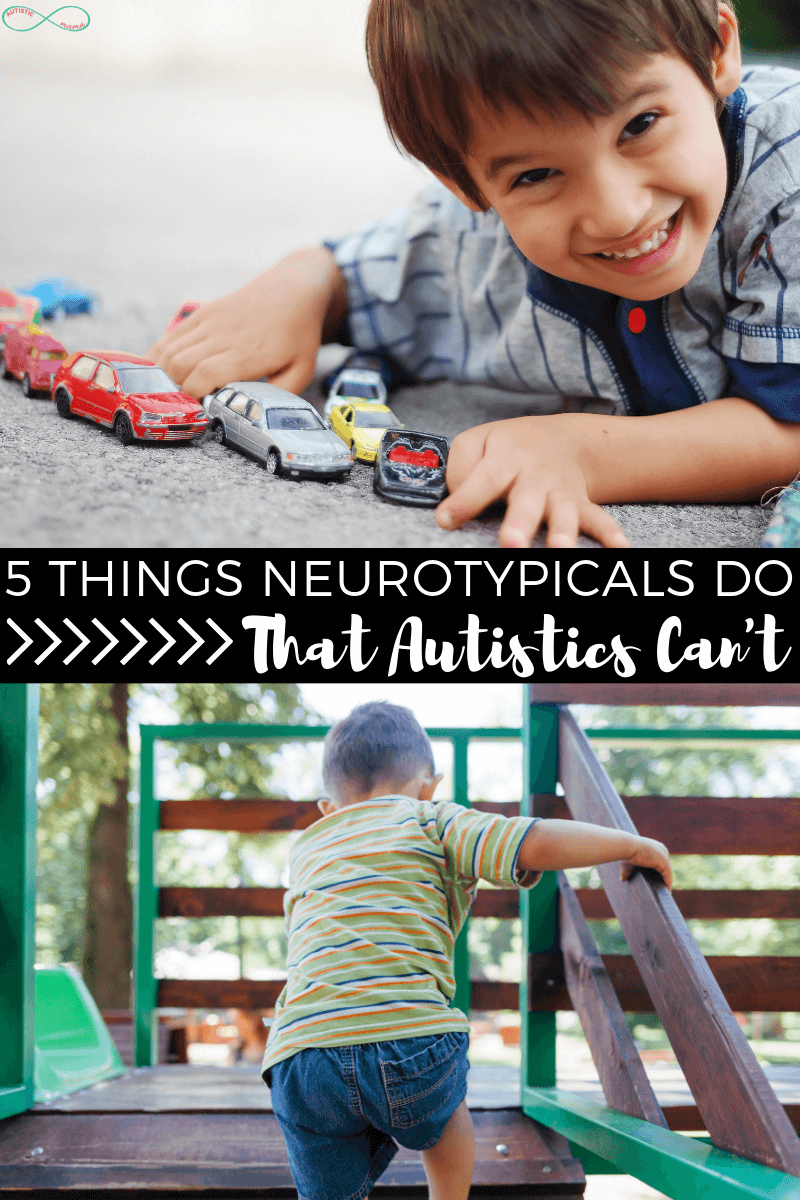 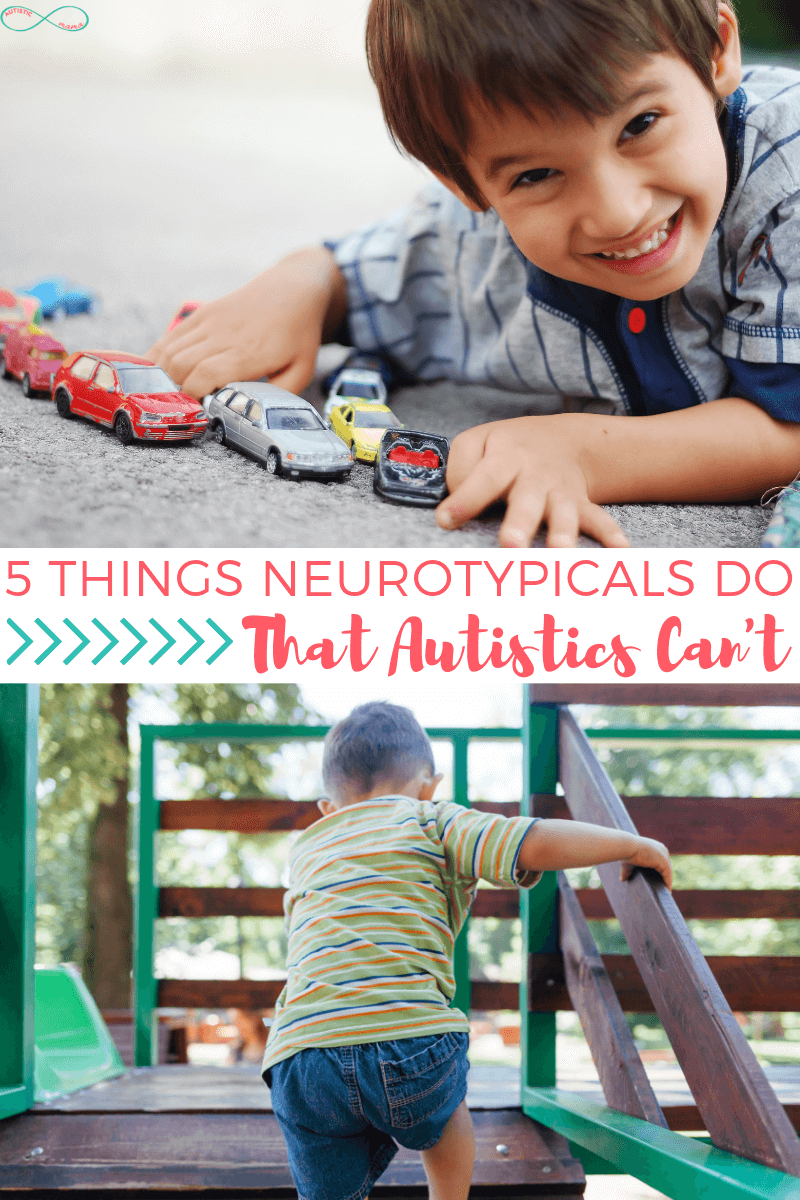 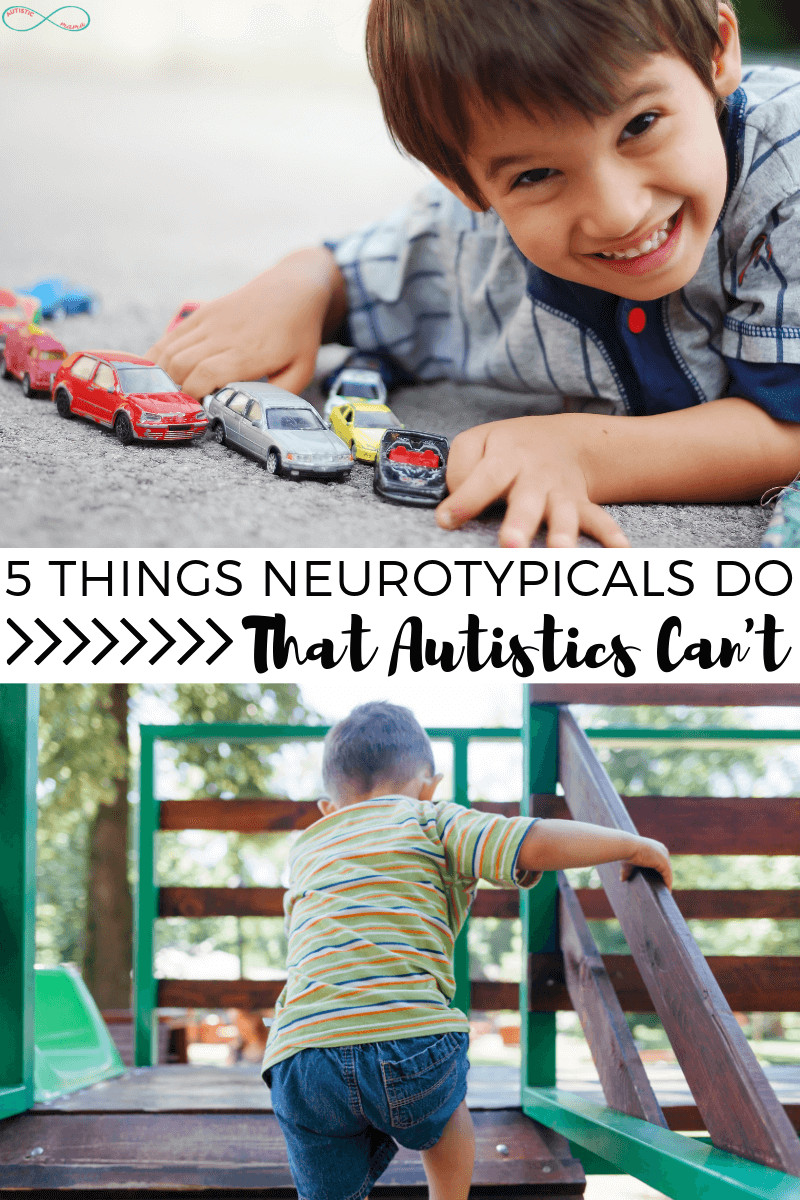 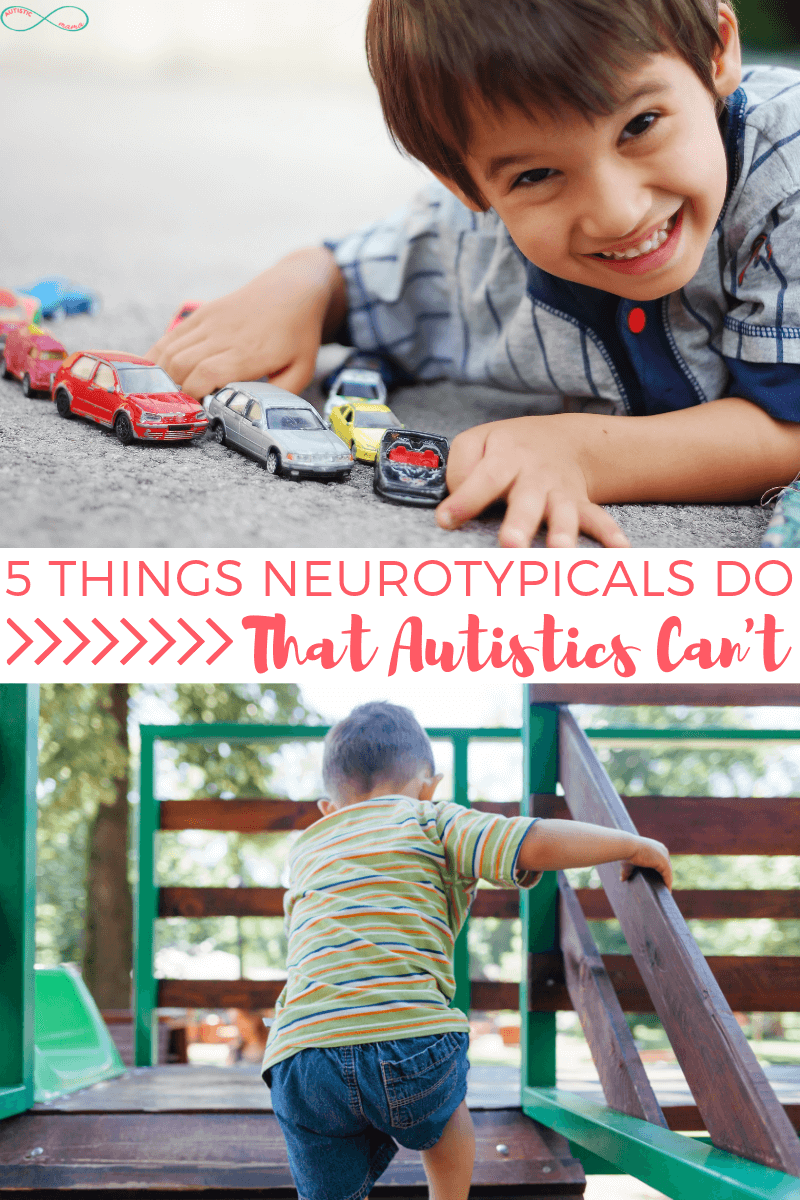 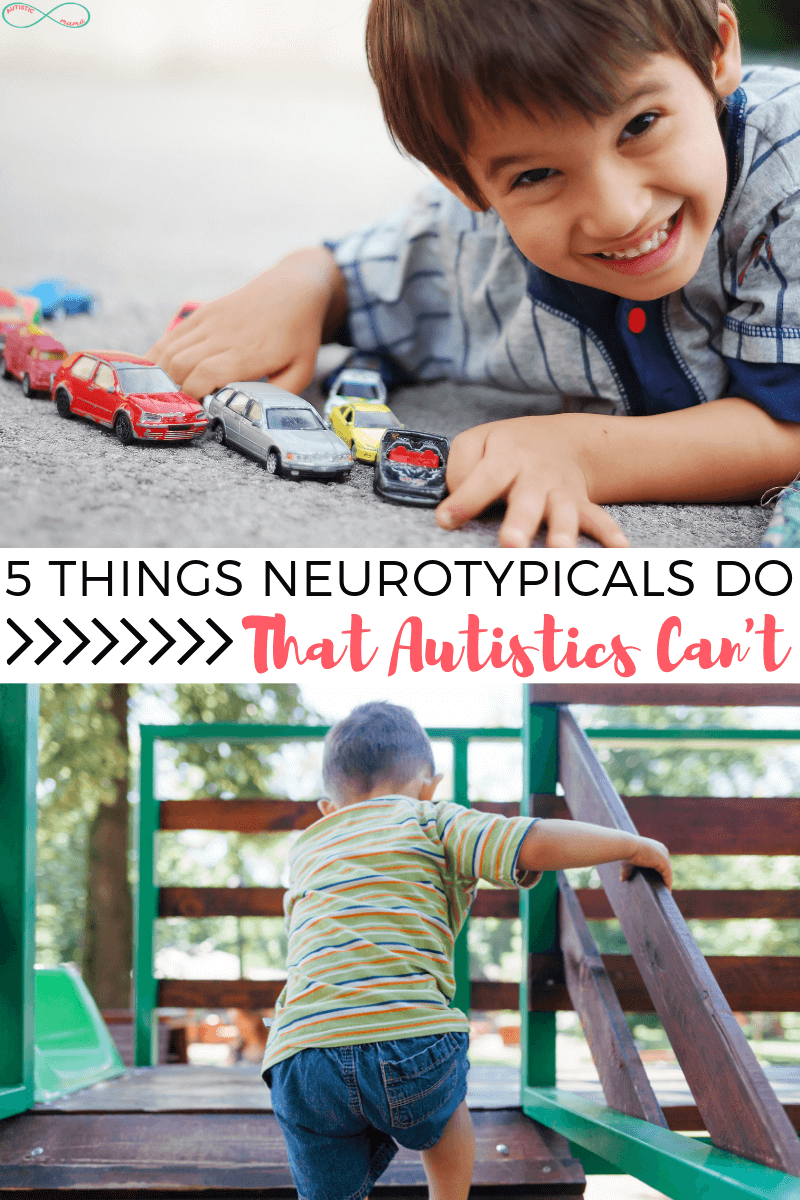 5 Things Neurotypicals Do That Autistics Can’t

So in this post I’m going to share five specific behaviors that my non-autistic child (along with most neurotypicals) can freely use that autistic children and adults are pathologized for.

And while it may seem trivial… I mean, why does it really matter if my autistic son’s behaviors are used as indicators of autism or seen negatively by the medical community? It’s anything but trivial.

Because those negative views from the medical community help shape the views by society overall.

Seeing these behaviors as inherently negative (but only when it’s an autistic person doing them) causes real harm to the autistic community when we’re just trying to live our lives like every other person.

So with that said… Here are 5 behaviors neurotypicals can do that autistics can’t.

Stimming is short for “self-stimulatory behavior” which is essentially any repetitive behavior or action that provides input to the person doing it.

You might hear stimming and picture arm flapping or rocking back and forth. And those are totally stims.

But so is bouncing your leg while sitting, chewing your nails, or twirling your hair.

See, when neurotypical people stim, we as a society hardly even pay attention. They’re seen as socially acceptable, but that’s only because there are so many neurotypicals in the world that you likely see someone do it every day.

But because autistic people’s stims tend to be seen as distracting or more extreme, but I would argue that it’s only because there are less autistics in the world, and you haven’t seen our stims as often.

The fact remains, my non-autistic child can stim in their own way to their heart’s delight without anyone saying anything, while my autistic son’s stims are seen as disruptive or annoying.

Oftentimes it is said that autistic children and adults have “black and white thinking” because they prefer to have things a certain way.

But doesn’t everyone prefer to have things in a certain way?

If my neurotypical child had a preference for a specific style of clothing or specific foods, no one would think twice. Maybe they would get a well-meaning tease about being a picky eater.

But when my autistic son has restricted food preferences or he needs to take a specific route to the store, it’s seen as rigidity and something that he needs intensive therapies to force flexibility.

Really, I had never thought of this black and white double standard until I thought about the therapies we put autistic children in.

See, one of the things that these therapies work on is “appropriate play” because autistic children tend to play with toys in different ways than neurotypical children. 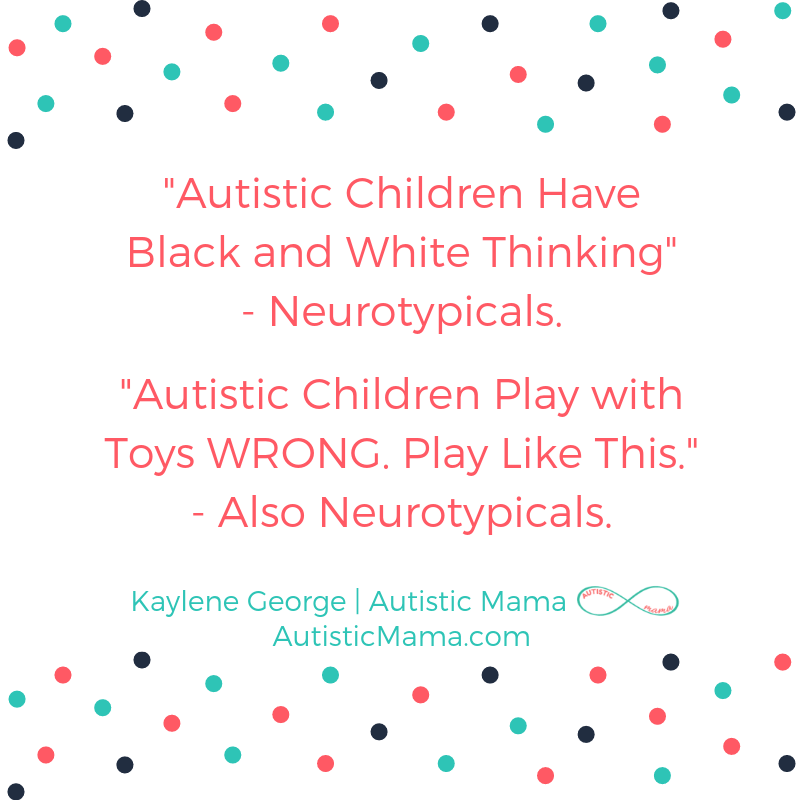 Autistic children also tend to focus in on special interests. That is, they have one or two specific things that they focus completely on.

Maybe they can tell you every single dinosaur’s scientific name, or maybe they are obsessed with making new cupcake flavor combinations like my son.

These special interests are often pathologized in the medical community and sometimes called “restricted interests”.

I’ve actually been advised several times to restrict my son’s access to his special interests and try to force him into other topics.

By contrast, my non-autistic child has been obsessed with inventions for years.

Not once did anyone tell me that I should dissuade them from his love of inventing. No one ever worried that I was letting them get too obsessed.

Neurotypical children obsess over things all the time.

Whether it’s Harry Potter, Shopkins, My Little Pony, Star Wars, Pokemon, or Legos, those kids are allowed to have those obsessions.

But autistic children aren’t given that same freedom.

Okay, I’ll be honest and say that this one has never made sense to me.

Autistic people are widely seen as having significant communication struggles.

And while some autistic people are non-speaking, or require another form of communication like visual pictures or an AAC Device, there are many of us who speak and communicate clearly.

We’re still seen with communication struggles, however, because we tend to miss certain non-spoken communication like sarcasm or subtleties.

Now here’s where this confuses me.

Autistics are direct and speak their mind. We say what we mean, we mean what we say, and we believe that neurotypicals mean what they say.

On the flip side, neurotypicals don’t communicate clearly. They say one thing and mean another thing, and expect people to see through the lines and decode the true meaning of whatever they’re trying to say.

And yet autistics are the ones who have communication struggles??

This one actually breaks my heart.

Neurotypical children and adults are free to demand and protect their autonomy.

On the flip side, autistic children are taught from an early age that their body is not their own.

Parents, teachers, and therapists regularly physically move autistic children’s bodies or make them do things whether they want to or not.

And when the autistic child protests, it gets called “extinction burst” or a meltdown and often the adult pushes even harder.

Neurotypicals are in charge of their own bodies, while autistic people are not given that same autonomy.

It’s odd to me how naturally people see neurotypical behaviors as completely different than autistic behaviors in society at large.

But maybe, just maybe, neurotypicals and autistics have a lot more in common than society thinks. And the only reason that neurotypical people’s behavior is seen as normal is because there are more neurotypicals than there are autistics.

So next time you are thinking about a typical autistic behavior being weird, unacceptable, or pathological, remember that neurotypicals probably do a version of that same exact behavior.

And as always, remember that autistic behaviors are valid, and we only want to be accepted.

Autism Misconceptions Even the Experts Believe 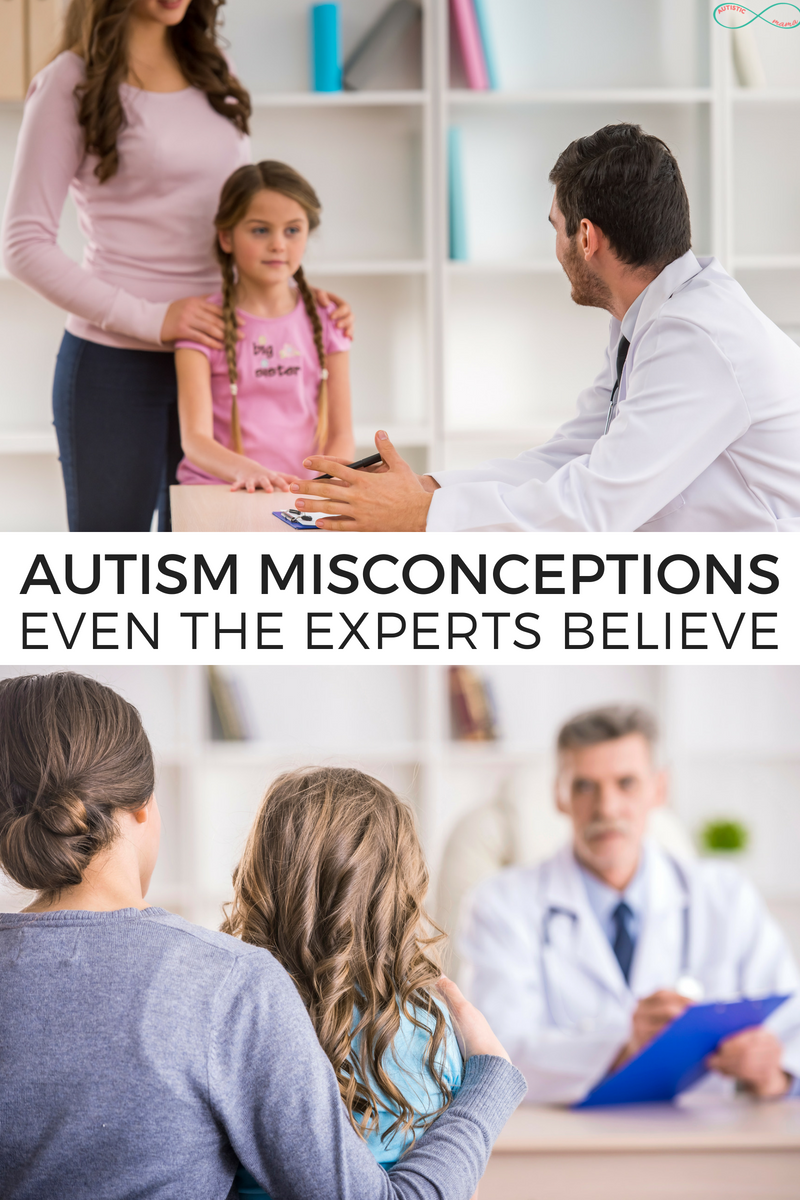 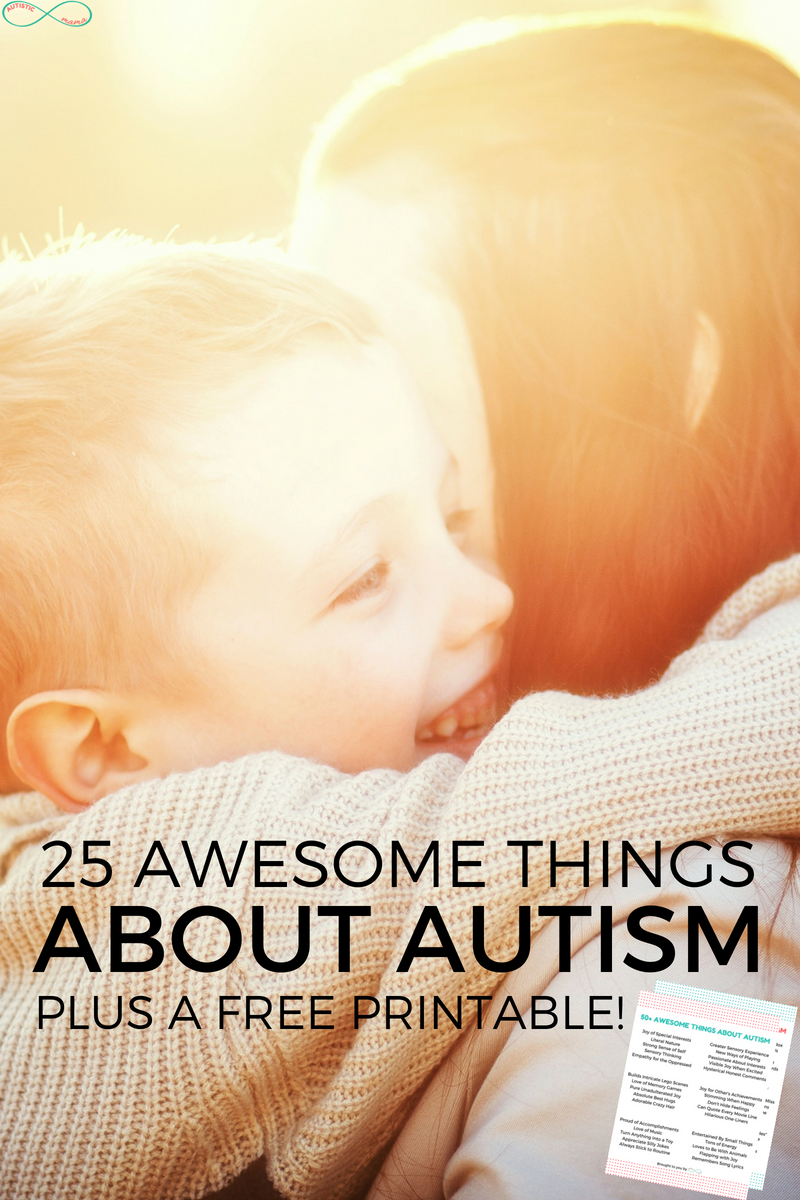 9 Comments on 5 Things Neurotypicals Do That Autistics Can’t