I’ve been a stay at home mom now for two whole years. In that time our lives have gone from crazy to crazier. We’ve started homeschooling. We have started three therapies a week for our two kids with special needs. I’ve continued working towards my degree. Chris has gone from working evenings, primarily while the kids are sleeping, to working all day and leaving me home alone with all the kiddos. We’ve fought with doctors and waited months for specialists to work towards getting official diagnoses for A-Man and Baby M. Chris and I also got married and announced that we’re expecting another baby!

Needless to say, our family has had a pretty intense few years, and I am unbelievably thankful to have been given the opportunity to stay at home (and now work at home) through it all. Some things have had to change, but there are some things that haven’t. I’m not a domestic diva. Never have been, and I never will be. If you check my dryer there’s probably a load from yesterday, and my sink is likely filled with dishes. The biggest surprise to most people about this stay at home mom is by far that I don’t cook dinner. Ever.

Why I Don’t Cook Dinner 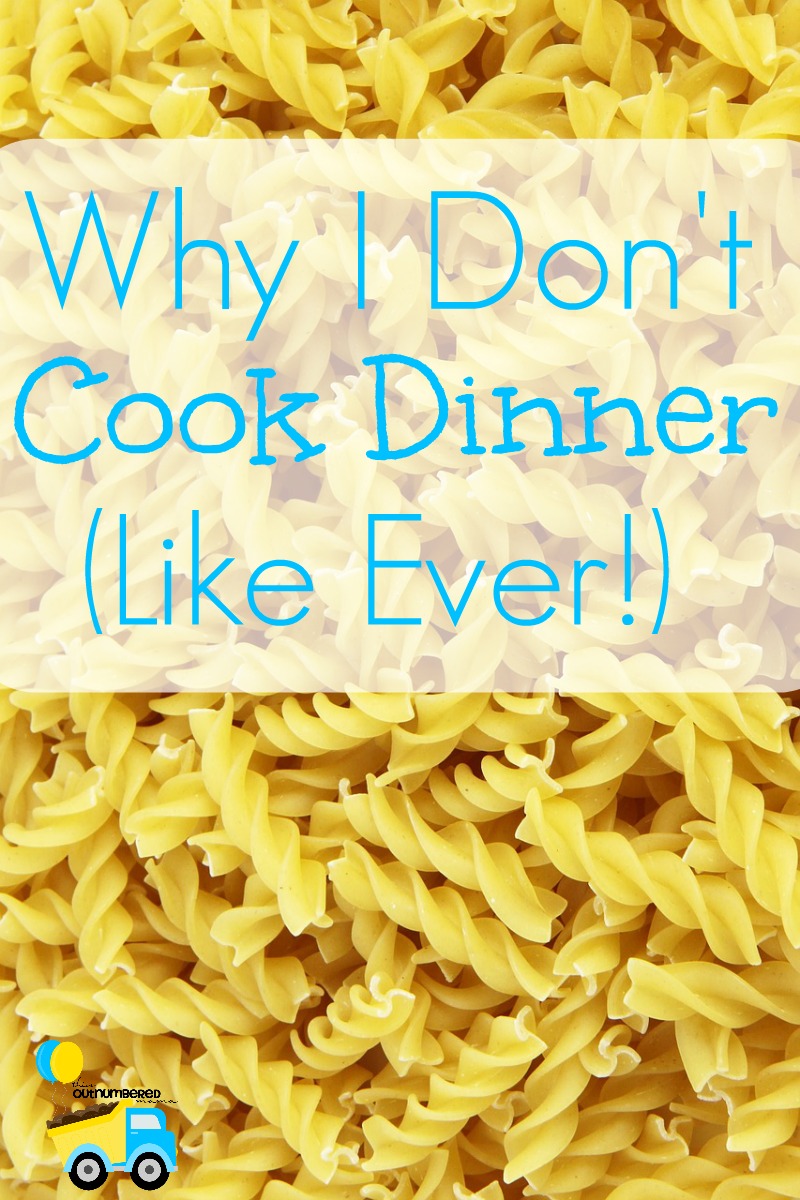 I’m Really *Really* Bad At It

Okay, so I’ll just start out by saying that I understand you don’t need to be a gourmet cook to cook dinner for your family every night. I’m not saying that I’m a bad cook because I don’t create Pinterest-worthy recipes. I have burned cheerios. Like, set them on fire. Apparently “hot cereal” means oatmeal and not cheerios on a burner. Who knew? I certainly didn’t. I’ve also burned too many cookies to count, pancakes, and microwave frozen dinners (yes, really). I can cook if I must, mainly from various boxes of “helpers”, but it really won’t taste good. There are few things that make me more sad than food that doesn’t taste good, so it just isn’t worth it to me.

Chris is Really *Really* Good At It

Okay, so I am one spoiled lady in that my husband cooked professionally for years before getting his current job. I tease him sometimes and tell him that our relationship started so strong because of food, but it’s actually totally true! He would bring me yummy things to eat while I was stuck in my office. That love of his food? It’s continued. He makes the yummiest mashed potatoes I’ve ever had, and he shares my love of way too much garlic on everything. I am even more spoiled in that he actually enjoys cooking, so it’s a win-win.

Cooking is Not My “Job” In Our Home

I am a stay at home (now work at home) mom because it doesn’t make sense for me to work outside the home. Mr. C didn’t start solid foods until he was over a year old, and up until recently was still breastfeeding every few hours. The younger boys have five therapies a week between them plus various appointments an hour away to see specialists. Mr. C is homeschooling because I will not put my 5 year old in a class with 7 year olds. My job is to keep my kiddos alive until 6 pm when Chris gets home. My job is to kiss boo-boos and protect nap time and deal with the tantrums and meltdowns. Breakfast and lunch fall under my job, so we keep it simple (cereal and sandwiches anyone?) but dinner is off my plate, and we’re a much happier family for it!

What about you? Do you cook dinner? Is there a job you don’t do that would “traditionally” be for a stay at home mom?

4 Comments on Why I Don’t Cook Dinner