Birthdays are crazy exciting for kids. How often do we tell our kids that it’s not all about them or that they aren’t the center of the universe? Well on their birthday it is all about them! They get a party with all their friends and family and they get to eat cake and ice cream and maybe even pizza. How could it be better?

Unfortunately, in split parent families, birthdays can be really hard. There can be arguments about which parent has the kids on their birthdays, or who can throw the most elaborate birthday party. Mom got a bouncy house, but Dad got a petting zoo! It’s just not pretty. I’m really lucky in that the boys’ biological dad and I still get along, especially when it comes to things for the kids.

How We Handle Birthdays in Our Split Parent Family 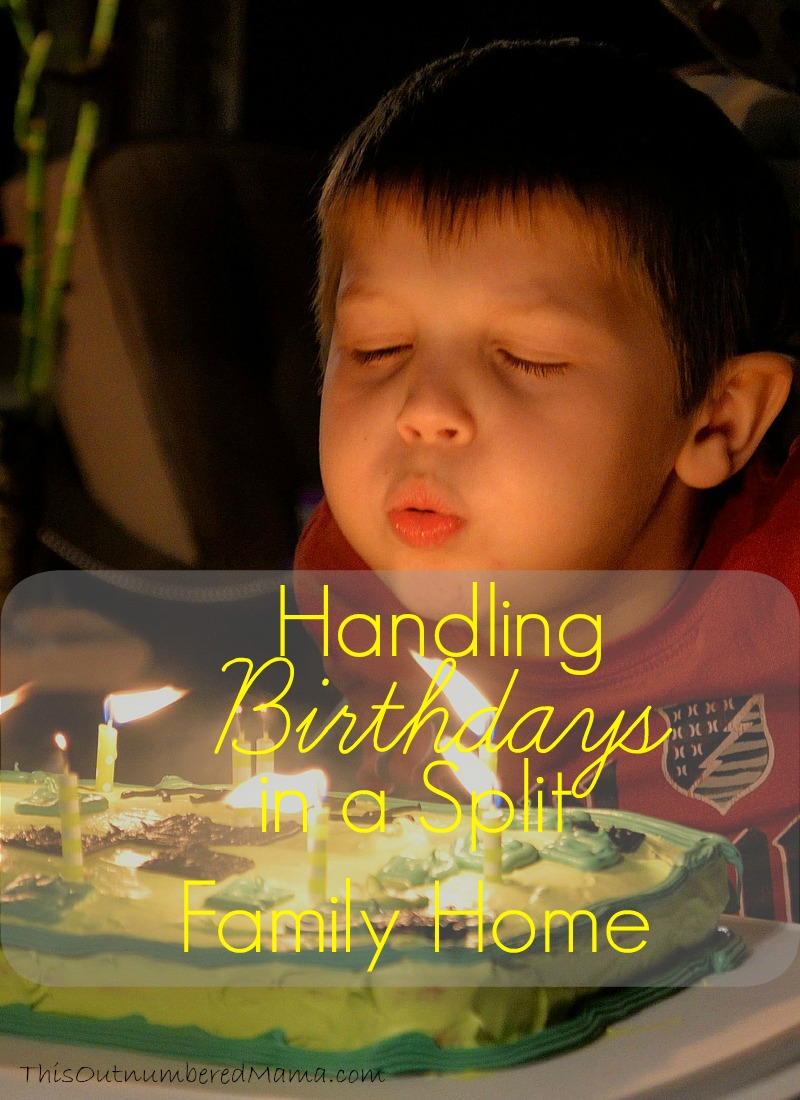 We have one birthday party for Mr. C and A-Man. Just one. It’s a rather large party because my family, Chris’s family, and their bio-dad’s family all come. I’m not going to lie to you, it does get awkward at times. For the first few years we had their parties at a neutral location part because no one had a house big enough and part to make everyone more comfortable. This year we were able to have the party in our home, and it was a great time! It’s important to keep in mind that the birthday is about the birthday boy or girl, and as long as everyone is focusing on their love for them, it will work out fine! That said, if you and your ex can’t be in the same room together without fighting, I do not recommend this solution!

Imagine this: You save up money to buy your son a bike and you’re so excited because he’s wanted it for months and you finally have enough to get it for him. Then right after he opens it on his birthday, his biological dad brings in a power wheel motorized hummer car. Your son totally forgets about his bike and spends the rest of the party begging to go ride with his friends in the backyard. Cue tears, resentment, and bitterness. Don’t let that happen! Communicate with your ex early and often [because their plan will change!]. If you plan on getting your son a bike, tell your ex as soon as you know that so that they’re prepared. Ask them what they plan to get so that you guys can try to stay within the same price range. I’m not saying one parent can’t spend a lot because the other can’t afford it, but communicate and be respectful with each other.

I am not a fan of resentment, so I try to settle things ahead of time to avoid it. I’m also a planner by nature, so trust me when I say plan out responsibilities. We have it split pretty evenly. I buy the decorations, but my ex splits the costs with me. He brings pizza, I bring cupcakes and snacks. We keep parties fairly simple, but even if you have elaborate birthday plans just try to split them evenly so that you both feel like you contributed to the party, but neither feels like they’ve thrown the whole party themselves.

Seriously, it’s a birthday party. Try not to take everything too seriously. Try to have conversation with all sides of the family. Make sure everyone knows everyone’s name. Give the kids some cupcakes, open presents, bond over the fact that you can’t wait until your kids are old enough to watch Harry Potter [just me?]. Try to have grace. If someone makes a comment that you don’t appreciate, assume the best intention. If someone is in the corner pouting, start talking to them so they are included. And above all feel blessed that your child has so many people that love him or her so much on their birthday.

What tips do you have for handling birthdays after a divorce?