Now that Christmas is over, it’s time to put all of the new toys away. The day after Christmas is always when I am overwhelmed by the insane amount of toys that my children have accumulated. We don’t do a lot of toys, but my kids have three sets of grandparents, aunties and uncles who love to spoil them crazy! My older boys have birthdays in February and April, so we have to clear the toys out now, or we’ll be even more overwhelmed after their birthday parties. What’s the easiest way to get rid of toys after the Christmas madness?

Involve Your Kids in Toy Management 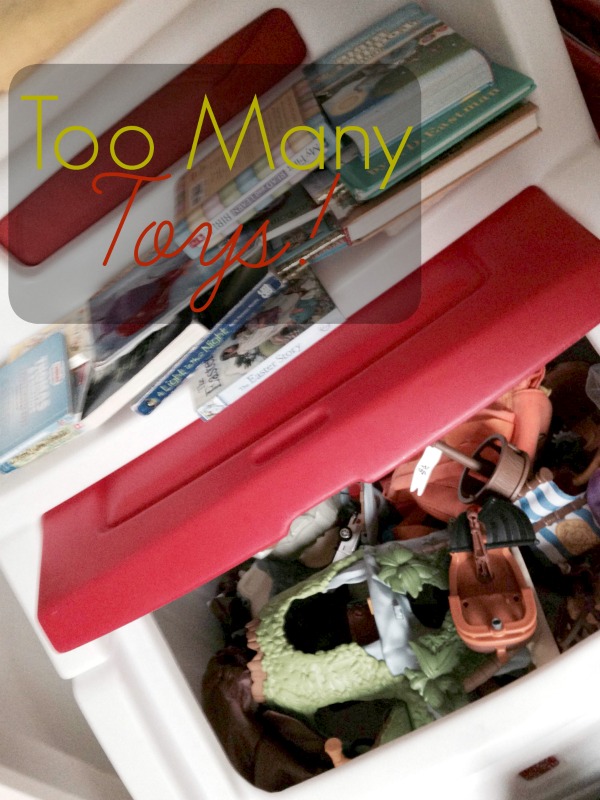 Okay, so most kids are not going to love getting rid of toys, and that’s perfectly okay! I am a grown-up and I don’t particularly like getting rid of my favorite things. However, it is very possible, and sometimes necessary to go through our favorite toys and get rid of ones that no are no longer used or loved.

Show Them the Benefits

If your kids are old enough, explain all of the benefits that they will see if you get rid of some of their toys. I like to point out how full their toy box is. They have to pull out all of their toys to see what they have, and then it takes longer to clean all the toys up after they’re done. Sometimes I point out a toy that was broken by being crammed into a too-full toy box. “What if [insert favorite toy here] was the one that was broken because you have too many toys?” That usually gets Mr. C on board to get rid of some of the clutter real quick!

Make it About Someone Else

When we first started taming the toy overload at Christmas time, we emphasized who we would give the toys too. “I’m going to take your toys” is a lot more aggressive than “We are going to give these toys that you don’t play with as much anymore to other boys and girls who may not have gotten any toys for Christmas”. I’m sure you can guess which one a kid is more likely to go along with. We have really tried to focus heavily on gratitude the last few years with Mr. C. We’ve had a lot of issues with entitlement, especially because he has different rules/toys at our house and his biological dad’s house. He is now starting to understand being thankful for everything that we have, so he is more than happy to share with other people who haven’t been blessed with as much.

Try Not to Force It

It is my goal to instill a spirit of giving in my children. I don’t want them to think that after Christmas Mom takes all their toys away. I want them to see what huge blessings they have, and want to share those blessings with others. So show your kids some grace. If they don’t want to give up their very favorite pirate ship, even if they haven’t played with it in a while, let them keep it. Suggest a different toy that they aren’t as attached to. Don’t shame them for keeping “baby toys”. Accept their choices when deciding which toys to keep and to donate. Let them give from their heart, not from force.

Give Toys to Real People

Goodwill is wicked convenient, I’m not going to lie. But if you really want your kids to understand the impact of their gifts, try to find real people to give their toys to. If that isn’t quite a possibility, give them to a charity that really gives toys to children. Goodwill is great, but people still need to pay to get what is donated. While the money goes towards very worthy programs, that isn’t the reason that we are giving away toys. We want to help make a child’s life a little brighter when their parents can’t afford to purchase them toys. Not even from Goodwill. There is a YWCA in my area that accepts toys for children of victims of domestic violence. Another place that will usually accept toys for real children is a local WIC office. Trust me, your children will remember giving their toys to a real person a lot more than pulling up to the back of Goodwill and dropping things off.

How do you handle the holiday toy overload? Do you purge before or after Christmas?

6 Comments on Too Many Toys!