We Don't Want to #EndAutismNow, and you shouldn't either. #EndAbleismNow

I’m autistic, so is my son, and I’m an autism advocate, blogger, and author.

That means I see a lot of “current events” in the autism world.

I was shocked, however, when I saw the new hashtag, and movement, that her video was starting…

Luckily, the autistic community jumped into action… Because we don’t want to #EndAutismNow, thank you very much. 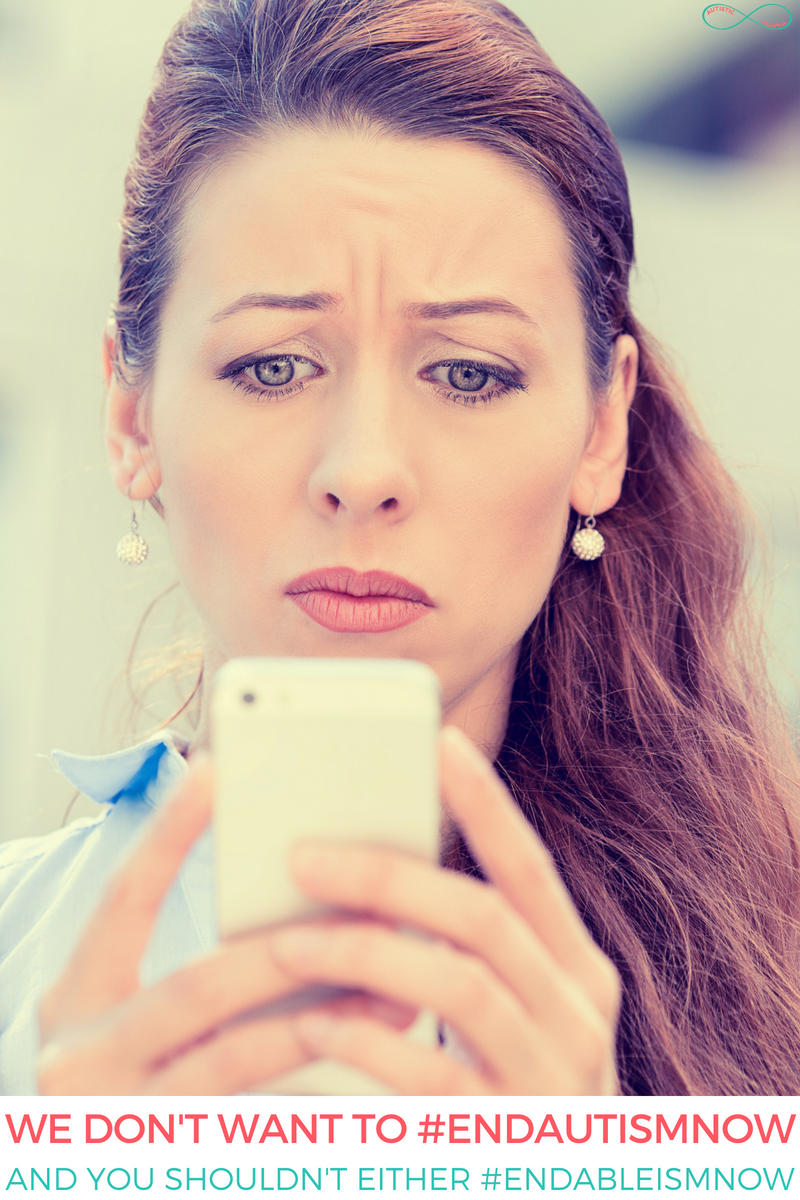 (Image description: Woman with long brown hair looks at a cell phone with an upset/concerned face. Text reads “We don’t want to #EndAutismNow and you shouldn’t either #EndAbleismNow” in all caps, coral, and teal.) 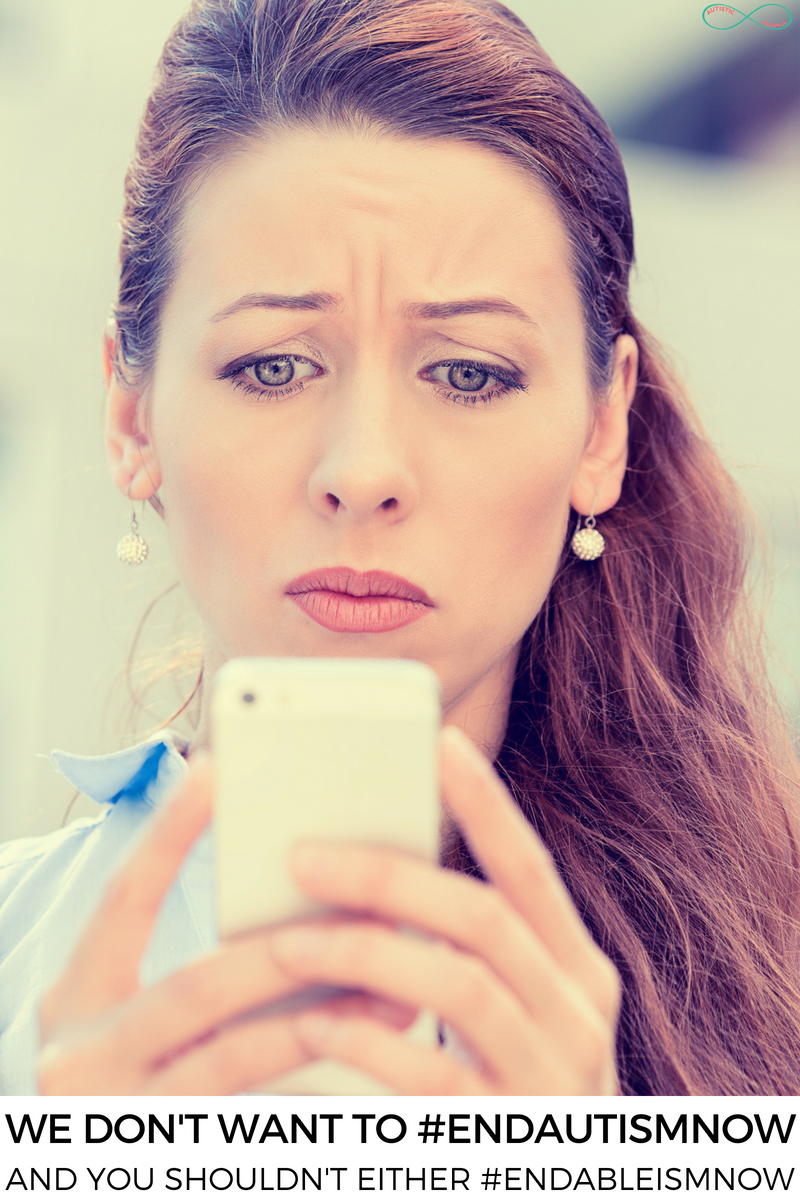 No, We Don’t Want to #EndAutismNow, Thank You Very Much

What does it even mean to end autism?

In fact, autistic people are vital to moving society forward.

Why would anyone want to end that?

#EndAutismNow began with a video from Jenny McCarthy, an ableist “advocate” promoting the book How to End the Autism Epidemic.

She claimed to know the “truth” about the “autism epidemic” and knew how to “end it”.

The video was a call to action from a woman who believes autism is the worst possible thing that can happen, and that we must “end autism now”, at all costs.

The hashtag quickly gained popularity on Twitter, and the ableism was terrifying.

Parents of autistic kids latched onto the hashtag, sharing how difficult it is to live with their autistic children…

#Autism is a disability & can be a horrible one at that. It’s not a personality trait or an identity. If the people who are so upset by this hash tag understood that you wouldn’t be angry to see people wanting to see an end to the suffering & struggles. #EndAutismNow

Time & time again when I get into conversations with HF autistics they tell me how hard their life is. All the different problems & struggles. When I mention something my son suffers with they try to “compete” or 1 up him. Why do you like your “autism” again?#EndAutismNow

…but it wasn’t long before the actually autistic community jumped in.

If you search the hashtag now, you’ll find plenty from autistic advocates.

We are NOT wrong, we are NOT ill, we are NOT broken…but we ARE fed up of this damaging, hate inciting shit.

We deserve to live. We need support and resources, not your hatred and constant flood of anger towards us – only because we dare to exist in a neurotypical world that hates us. #ActuallyAutistic #Autism

The idea of “ending” autism is extremely harmful to the autistic community.

The fact is, it’s time to embrace autism, not end autism.

Campaigns like #EndAutismNow further stigmatize autistic people and make it okay for society to ignore our need for accommodations.

When the world is so focused on “ending” us, there’s no room for supporting or accepting us.

Why include us in your classrooms if you just want to end us?

Why accept our noise canceling headphones and our fidgets if you just want to end us?

Why develop better communication technology if you just want to end us?

Instead, let’s embrace how we are different.

Let’s get autistic people the supports and accommodations they need to thrive.

Let’s create a society where autistic people are free to be who they are and aren’t made to feel like burdens.

(Image description: Woman with long brown hair looks at a cell phone with an upset/concerned face. Text reads “Don’t #EndAutismNow | In Response to Jenny McCarthy” in all caps, coral, and teal.)

And while we’re at it… How about instead of #EndAutismNow we decide to #EndAbleismNow?

Because the fact is, this #EndAutismNow campaign is ableist hate speech.

It’s ableist to seek to “end” our neurology because you feel yours is better than ours.

It’s ableist to start a campaign that calls for an end to who we are as humans.

So I say we need to #EndAbleismNow and start #EmbracingAutism. 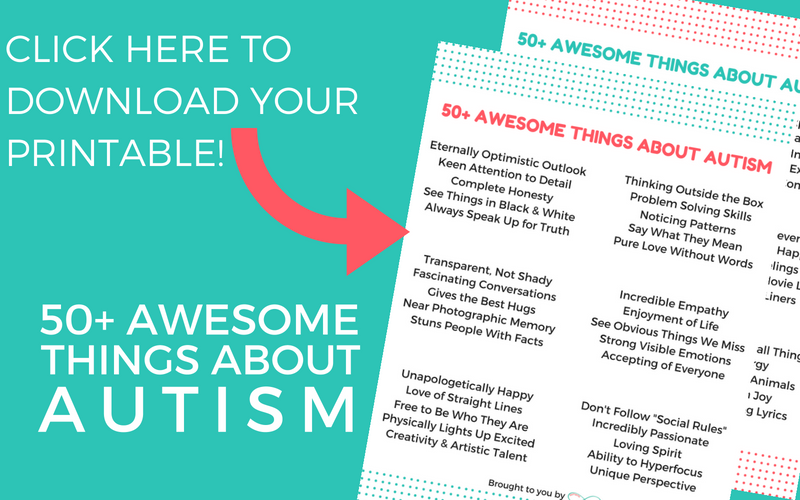 6 Comments on No, We Don’t Want to #EndAutismNow, Thank You Very Much