(Inside: A marriage between someone who’s autistic and someone who’s neurotypical can be pretty tough, and sometimes it feels like you’re from different planets… But check out these 5 tips for making autistic/neurotypical marriages work to find practical strategies to strengthen your marriage!)

When people learn that I’m autistic, I get a lot of different reactions.

But sometimes it’s my husband who gets the strange response.

And some people just don’t understand how a neurotypical person is married to an autistic person.

A slightly veiled ‘how do you deal with that?’ gets tossed his way fairly often.

And while the question in itself is offensive…

(I mean, why doesn’t anyone ask me how I deal with him? Neurotypical people aren’t always the easiest to deal with!)

…It also got me thinking.

Chris and I have been together for about five and a half years, and our marriage works really well for how opposite we are.

Don’t get me wrong, we are far from perfect, but I realized that I have 5 practical tips for making autistic/neurotypical marriages work that I’d love to share with you! 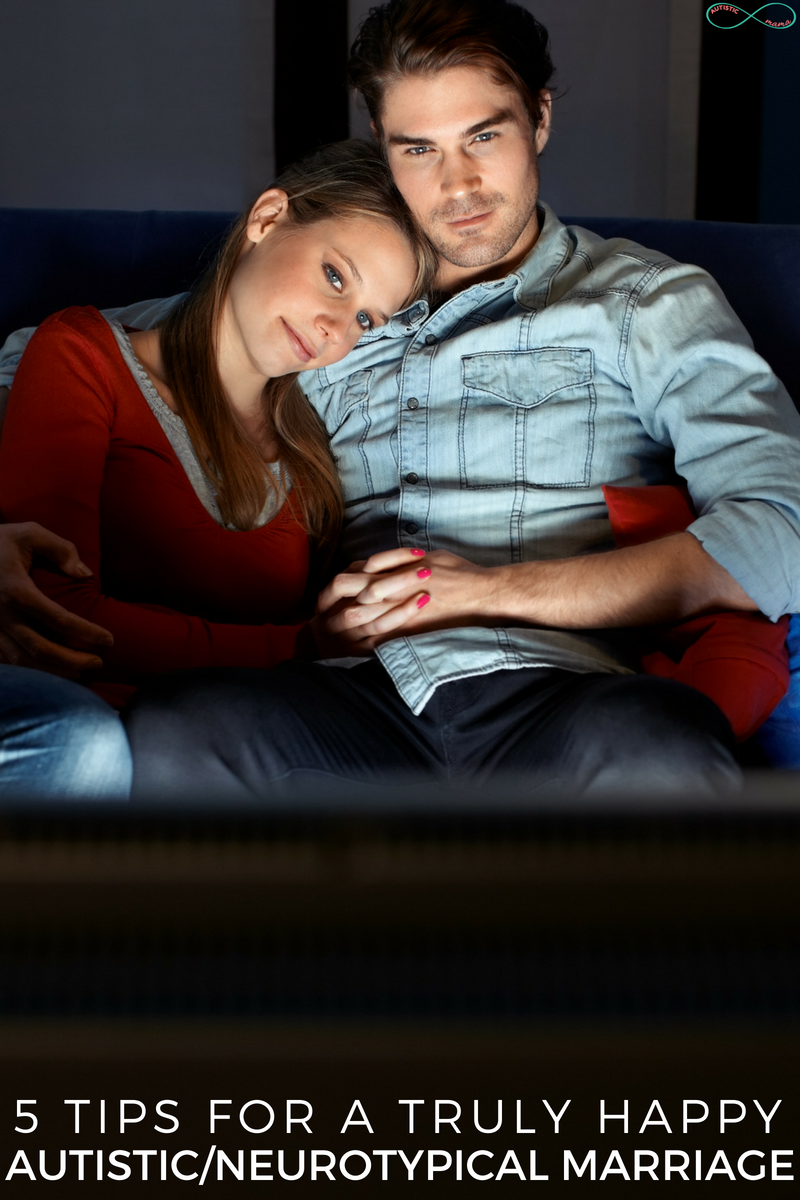 *Note, Chris isn’t technically neurotypical. He has dyslexia and ADHD, but they don’t have a large effect on his day to day life, so we count him as mostly neurotypical.

Of course, when Chris and I got together, neither of us knew I was autistic.

I knew I had debilitating anxiety and I wasn’t taking any anxiety medications.

But beyond that, I never had a word to describe my ‘quirks’.

“I’m weird… I obsess over things, and I absolutely can’t let things go… I see the world in black and white, so when you’re wrong I can’t see it as just a difference of opinions… I’m incredibly picky… I use very precise language, and I will take what you say literally and believe you…”

He always accepted me as is, before we had a real ‘reason’ that I was the way that I was.

Still, the acceptance doesn’t mean that we have always had it easy…

There were a few things we had to learn to make our autistic/neurotypical marriage work.

This might be the hardest one for me because I’m so specific about language.

But really, learning each other’s language will make a major difference in your marriage.

And I’m not talking about “love languages”, although those are totally helpful.

I mean real-life how you communicate languages.

For example, Chris jokes and teases often. I don’t. I don’t like to feel like I’m the butt of a joke.

See, I learned to communicate by hyper-observing everyone around me. Their voice and facial changes while they’re speaking, the way they move, etc.

So when Chris does something small while talking, I have a bad habit of assuming he is upset or angry.

Fact is, he didn’t even know he did whatever I noticed, and he’s perfectly fine.

The basic tip is this: learn each other’s language the best that you can so that you can communicate more clearly.

#2 Have Regular Check-Ins When NOT Overwhelmed

I cannot say enough about how important it is to have regular check-ins when neither of you is overwhelmed.

I’m sure this is helpful in all marriages, but in an autistic/neurotypical marriage, it’s VITAL.

When you’ve hit sensory overload or your spouse is on their last nerve, neither of you will be communicating clearly (or kindly!)

So that’s definitely not the time to communicate that you need the dishes to be done a specific way or that everytime your spouse doesn’t put something on the calendar it sends you into a meltdown.

Go calm down, and have check-ins regularly before a huge blow-up starts.

We aim to check in with each other each morning and every night, just to see if we have any immediate needs, then we have longer check-ins weekly. 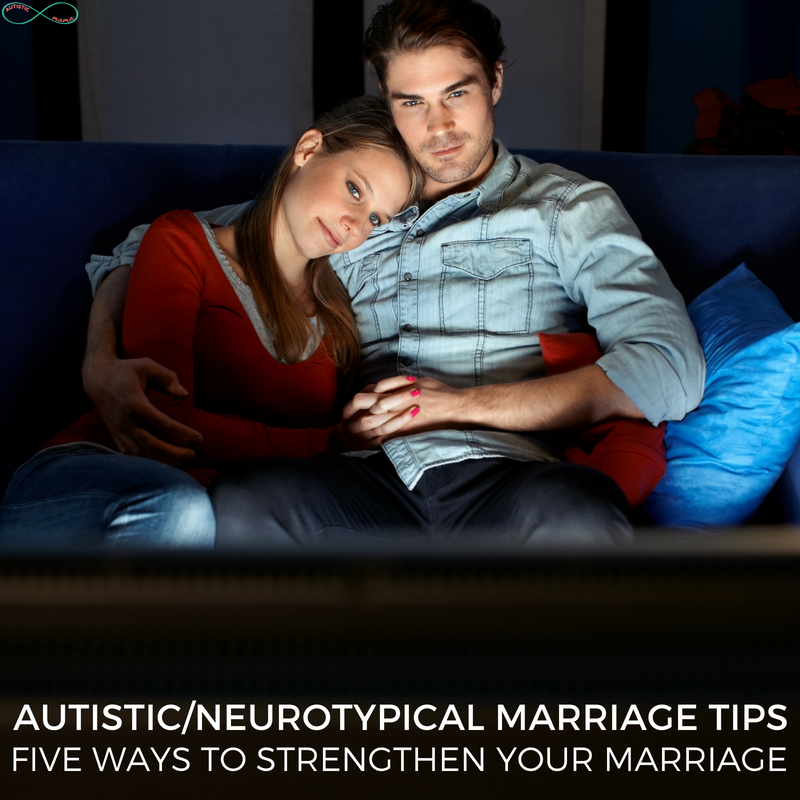 This might sound ridiculous, but it is amazing how your arguments will change when you make just a few tweaks to make them more sensory friendly.

Because let’s be real… You’re going to argue.

But the difference between an argument ending with a compromise or ending with a meltdown can be as simple as having a sensory friendly argument.

Here’s what I’m talking about:

When we argue, we don’t realize the overwhelming amount of sensory input that’s involved.

The volume’s louder, we’re watching our spouse’s face and body for non-verbal communication, we’re often forced into eye contact/looking someone in the face, and the entire experience can be exhausting.

So how do you make your arguments sensory-friendly?

Basically, whatever helps you focus and stay calm, incorporate it into your arguments.

This one is a toughy, especially when you communicate in different ways.

If you’re someone who communicates your thoughts more clearly in writing and you clam up when you talk, write out your thoughts and feelings.

But on the flip side… You have to be prepared to accept communication however your spouse communicates.

If that means talking, you have to be prepared to accept that he’s talking his thoughts and feelings.

Text to speech and speech to text.

Does this make arguments last a bit longer with the translating needed? Sometimes. But the argument will be more clear and you’ll be able to truly listen to and process what each other is saying and come to a solution.

Most importantly of all, remember that you are both trying.

Being an autistic person married to a neurotypical person is hard.

Being a neurotypical person married to an autistic person is hard.

Honestly, being married is freaking hard.

So take a moment, remember that you and your spouse are both trying your hardest.

Accommodating for your spouse can be extremely difficult, and both of you will fail at times.

I still get angry at Chris sometimes for saying things he doesn’t mean, and he still gets angry sometimes that I nitpick his language. We’re a work in progress.

And you can do the same with your spouse. 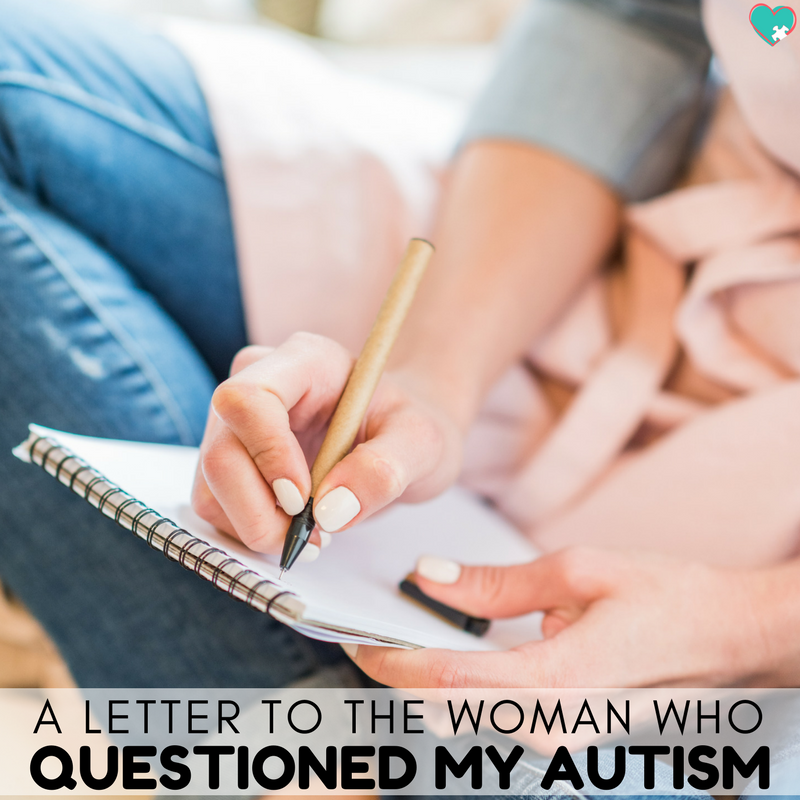